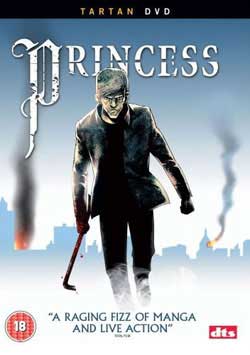 The 32-year-old clergyman August returns home from years of missionary work abroad because of the death of his sister Christina, who – after going from greatness to the gutter as the famous p*rno star ”The Princess” – has finally died of drug abuse. She has left her five-year-old daughter Mia with Karen, a prostitute. August pays them a visit to bring Mia home with him and become her guardian.

Burdened by sorrow and guilt, he decides to avenge Christina’s death and brings Mia along on a crusade to clear his sister’s name of p*rnographic connotations. The mission escalates into a brutal and violent rout as August attempts desperately to protect the only thing he holds dear – namely Mia – forcing him to make a fateful decision.

Stark, brutal, emotional, and vividly enticing …Princess proves to be a film of its own making. Combing animations with interludes of real video it creates a pretty well laid out drama that takes in alot of controversial content and still a heartwarming story. No, not a horror film exactly…but there’s enough here to be considered horrifying. The stage is set with a young girl names Mia who is being picked up by her uncle August.

But before entering the brothel where she is currently staying we are pulled into a world of p*rnography and August’s sister Christina. Clever use of titles tell the story pretty thorough with out showing or saying alot. Christina “was” a celebrity p*rn star. Dead at an early age she leaves behind 1 daughter who is on the verge of becoming an orphan. We assume that Christina dies from a hard lifestyle, and cutaways of that lifestyle are both wild, constant and fast moving.

Princess is the name of the film she starred in which put her in notoriety as a p*rn actress. The film went on to spawn several more sequels and a series of front cover features based around her and her character. It’s pretty evident that Christina enjoyed this lifestyle and flourished in it. The cons to the whole deal was the influence it afflicted on her daughter. Her daughter of 5 has seen way too much for a girl her age. Circumstances along he way point to abuse and inappropriate behavior that could of only been influence by her mothers lifestyle and lack of care. August comes into the picture as the hero.

He decides to take care of Mia and try and keep her from the evils of this world. Though that journey may be harder than he thought with so much baggage to clean Mia of and the evils of the world around her. Even after her mother’s death, symbols and legacy p*rn materials dirty up the world making it impossible to break away from. August who blames himself for his sisters path in life makes an oath to rid the world of the filthy memories of his sister. His first attempts are in the form of a request for the studio that houses the tapes to destroy all materials that relate to Christina.

This of course is taken pretty lightly by the men in charge who have profited nicely from Christina’s films. Charlie, her former boyfriend is also the main driving force behind Christina’s p*rn direction. Mia who is only 5 and still naive believes that staying with Charlie would make things better. August wants to destroy the whole industry single handed.

What is surprising is August is a pretty capable rouge force to reckon with. He single handedly takes on the men, the archives and destroys half the town int the process. Even attempts to trap him prove to be useless as he is too quick to turn the violence back on them. Mia is forced to deal with the violence and the bloodshed as August makes his way thru the channels.

The film is animated with great style and use of mixed media. In all the impact factor here is there is a well told story at the herat of it that deserves a good viewing. elements within step into taboos but the heart of the film is the search for justice and good will. Told in a modern storytelling approach “Princess” is a great film!