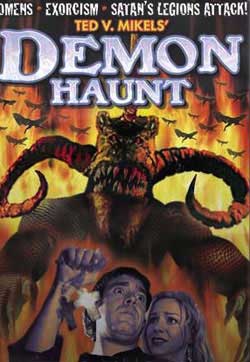 A school teacher and her wheelchair-bound sister purchase a house that seems to be haunted by a strange supernatural force. Father LeCleur and his son Raymond are called in to vanquish the demonic entities. But when the hell-spawn turn out to be much stronger than anyone thought, a bloody showdown ensues.

You might not recognize the title but you’ll surely recognize the directorial work in this new release directed by camp icon Ted V. Mikels aka “Astro zombies” and “Corpse Grinders”. Demon Haunt stars the lovely and talented Olivia Dunkley who pays the role of Dana, a school teacher and part time costume designer. She has just acquired a new house that was made affordable for reasons unknown. Little did she know that the house is haunted and serves as a portal for demons. That’s quite alot to chew on, but read ahead.

The times are not without there troubles, which also doesn’t help matters. Dana’s husband has died in a car accident and her sister Jackie (Amanda Jade) was catapulted out leaving her a cripple. To make matters worse, this new purchase begins to unveil itself with a smattering of demon activity. Dana, scared and confused calls upon a local retired expert by the name of Raymond LeCleur (Sean Morelli). Raymond, in his retired state wants nothing to do with demonic cleansing any more, let alone making a house call, but his partner Scotty (J.P. Edwards) convinces him otherwise. Raymond determines a legitimate haunting that will test his special abilities to there fullest. As these demons literally come flying out of the walls and shooting lighting bolts out of their eyes, we begin to wonder how many cheesy models the cgi team had laying around on their hard drive that would fit into a low end need.

Ok, all sounds good and dandy, but there is a few things that need to be said. If you didn’t catch the cheesy CGI work on the cover, you surely will in this film. In fact a few scenes were actually replaced with low end CGI that looks like something out of SIMS. Cutting corners is a given these days, but anyone in the business knows that bad CGI is a death sentence for films. In my own background, I can tell you that the presentation of it is not far from “beginner 3D max work” with blocky looking characters, bad movement and an unrealistic display of 3D model usage. That in itself should be enough to say. Though I do believe when it’s “that” bad, it’s can sometimes be a point of ridiculous and absurd. 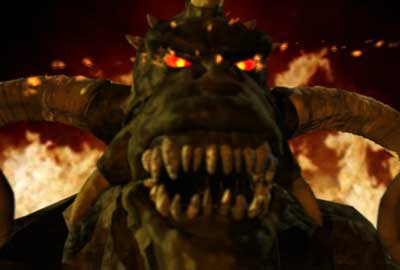 With this in mind, Demon Haunt is sure to spark the ol….. oh that looks so bad from viewers, that it actually might serve as a point of entertainment in itself. Think Mystery Science Theatre here and your perspective might change a bit. In one scene, Jackie is catapulted from her 3D car, while her 3D body flies thru the air and then edited back into real footage. The team made no real effort to hide the video game look of it, so the scene ends up being entertaining in its cheesiness. I haven’t seen the Ted V. Mikels collective of films, but I think maybe his talent shines better when he has cheesy practical effects to work with than trying too hard to high tech it. The bonus is there are actually a few talented featured performances here that despite reacting to green screens are still worthy of more roles themselves. Comedic relief comes with the character of nosy neighbor Hank (Rusty Meyers) who nails it as a annoying next door car salesman type that asks too many questions. I was reminded of George Wendt from the movie “House” who kind of feels like a similar style role. 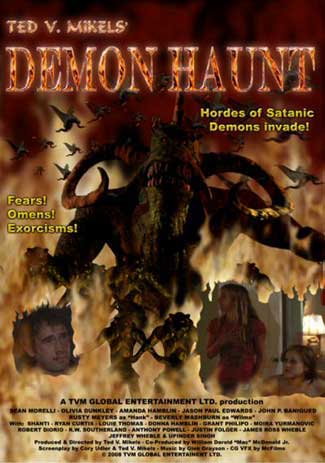 In closing, there are alot of good times thru bad filmic elements that make it worth your time for that alone. Go in with low expectations and a need not to worry about any scares whatso ever and I think you’ll be just fine.