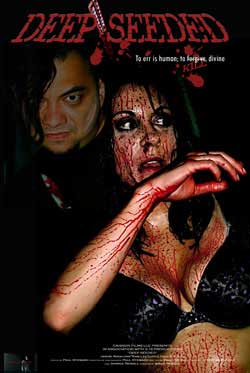 Written and directed by independent filmmaker Brian Troxell, the film deals with the psychotically shaken killer Brad (death metal legend KAM LEE) with a “Deep Seeded” past. He plans to avenge his horrible high school days when he hears of his schoolgirl crush unexpectedly passing away, and comes into contact with her two daughters (JANINE ANZALONE, LITTLE ITALY). This stomach-wrenching thriller takes vengeance to an elevated level by showing just how sinister Brad is and how shocking brutality can be.

“I wanted to make a film where I was able to take off the gloves and stop sugar coating everything”, says the director about the brutal scenes viewers can look forward to.

Backing up the crew of Caisson Films is special effects team CS STUDIOS, who already have an extensive list of independent horror films under their belt. Some effects viewers can expect to see in the splash zone include grinding a leg in half with a saw and ripping nipple rings out with a knife—just a couple of Brad’s very creative ways of inducing torture.

Also teaming up with Caisson is media production team 3:16 PRODUCTIONS. This team expands on the whole spectrum of media, including filming and editing some of Troxell’s previous work.

Production has been officially wrapped as of mid-October, but editing isn’t expected to be complete until summer of 2011, which will also be done by 3:16 Productions. For all you horror mongers out there, Deep Seeded will be well worth the wait.