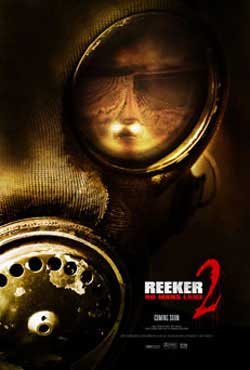 With a determined sheriff (Robert Pine) and his son hot on their heels, two casino robbers quickly realize that jail may be the least of their concerns when they discover that they’re being hunted by a malodorous monster. Michael Muhney (“Veronica Mars”), Valerie Cruz (“The Dresden Files”), Wilmer Calderon (“The Shield”) and Desmond Askew (Turistas) also star in writer-director Dave Payne’s terrifying thriller.

One of the new films being promoted under GhostHouse Underground’s 8 films directed by Dave Payne, we are introduced to “No man’s – Land” Rise of Reeker. Which is a sequel of sorts to the highly fan praised original “Reeker” film.

All we know is that when Reeker comes around, the place stinks to high heaven. I was really pleased with the first 5 minutes scene in where a traveler runs over a hitchhiker, backs up and then proceeds to torture him even more. Now that’s quality horror right there. I know, your worried for me…but hey cinematic experience is what its all about. We follow this dapper fellow to a hidden hideout where he’s got a stockpile inventory of dead bodies laying around. Apparently he is some form of serial killer, being possessed by an unknown entity. 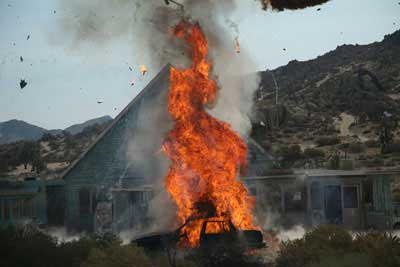 Quickly we are taken to a new story. One of which involves the town sheriffs, a couple of bank robbers and the workers at the local diner. Maya, (Mircea Monroe)the hard minded waitress is taken hostage by her former bank robber boyfriend. This threat is short-lived as they find out that new threats actually are in place. The Reeker as they call it, is out for blood.

Now the film has its moments. There’s some comic relief in a man who loses half his skull and still walks around like nothing happened. And then there is the invisible wall that everyone keeps running into. Orchestrated pretty nicely but nothing you can’t fake with some decent green-screening and some compositioning. 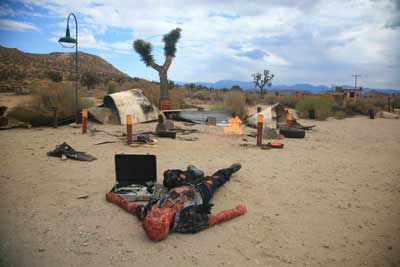 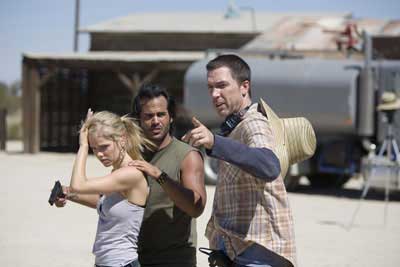 The Reeker has this funny walk which is sort of a skipped-framed jitter surrounded by stink gas. Actually for the record I really dig the effect of it. He wears this gas mask (cause ya we get it, he smells) and does a combination of flame throws and stomach drills with some homemade device as he hunts his prey.

These is some level of entertainment but its mixed in with confused logic. Logic that I don’t think you really put all together. Peoples hearts are at half speed , The reeker is some sort of Reaper or alien (which its it and does it matter? ) He possesses folks as a serial killer sometimes….and what’s with that invisible wall anyways? We are given a run down at the end of the film, though it still is rushed and kind of misses the mark. 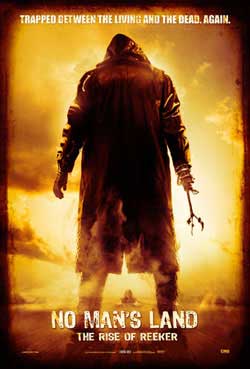 I think the message of Reeker got lost along the way, simply put. Your still in for a few good killings but in the end you kind of left in the dark scratching your head. Lets give it that …yep its a rental but it “stinks” alittle – pun intended. No mans land should stay exactly there.