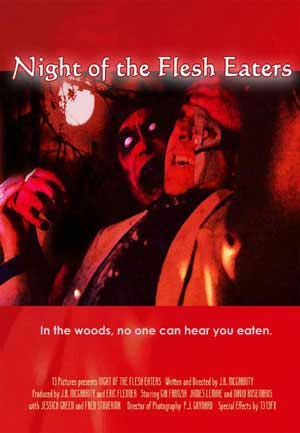 Talk about a crazy original piece, “Night of the Flesh Eaters” is exactly that, part horror and part comedy.

From the getgo we are taken into the woods and into the mind of director J.R. McGarrity. “Night of the Flesh Eaters” is the term given to this particular night where we find ourselves in the drama of 2 goons, an assassin and the goons unfaithful wife. To back track a little, the assassin was hired to kidnap the goons wife and his supposed lover so they could face the consequences of being executed for there discovered affairs. The assassin who seems to have a case of the Clint Eastwood complex (in a humorous way) agrees to meet the goon in the woods to carry out the deed and collect his money.

Things get mixed about, the tables turn and then things start to get really weird. According to legends this area of the forest happens to be a native american folklore hub that occurs on this particular night at midnight. This night in fact seems to be a calling card for all the forest cretins to emerge. What is funny is the fact that the assassin who also is a folklore teacher seems to know a little too much about all the variations of night creeps that pop out in numbers.

Of course, one thing leads to another and the goon and the couple end up staying in the forest a little too long. As the 2 flee, the goon ends up being attacked by killer flesh eating dwarves, which he manages to escape with a few bites, a dangling eye and some other damaging afflictions. Though determined he continues to chase after the 2 after being revealed the truth of the inside plot that has transpired.

What is comedic here is the mix of characters along the way they encounter. This includes “fire dogs”, mimicking clowns, angry red shaman spirits, pig faced creeps and even the dreaded rock man. It appears the journey thru the woods is one filled with many such encounters. The climax seems to be the dreaded evil shaman who is obsessed with having you fetch a stick so he can eat you with it.

The characters they encounter are pretty post 80s era in there makeup and attire, but the novelty of it keeps it amusing and creepy. Tom Devlin is responsible for the FX work and creatures which even though are not the high production value of what you’d see in a Resident Evil film are pretty entertaining in there concepts.

With a film like this your expecting a certain turn of events and what keeps it fresh is its clever invention of story-telling.

Night of the Flesh Eaters has a really nice rhythm. The sound and audio are well done and the film moves from line to line nicely. For an independent production this film has excelled beyond my expectations for it. The story even with its horrific overtones was actually quite charming in its fairytale like presentation. This film is odd enough that it will find a special place among the horror genre and may even get passed around a bit among friends to show off its quirkiness. Right now it looks like to acquire it you have to drop there website at www.nightoftheflesheaters.com or by Amazon.

Here’s’ the thing – I know out of the 40 rentals that came out last month, your probably getting tired of the same ol thing, same cliques, and same plot derivatives. NOTFE is something different – guaranteed!

I think you will all get a kick out of it the same way I did, good fun with the Flesh eaters!

Tags Night of the Flesh Eaters