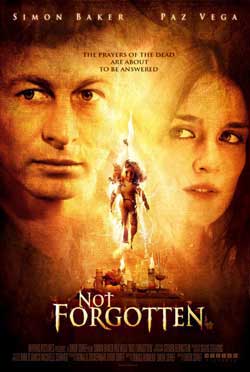 In a Tex-Mex border town, a man and his wife must face their tortured pasts in order to save their kidnapped daughter.

When one is pushed to an emotional breakdown followed by a kidnapping of their own child, this individual will stop at nothing to retrieve their prized possession no matter what. In Dror Soref’s Not Forgotten, a distraught father is sent on a wild chase to find his lost daughter while defeating his reputation from the past. The movie is filled with exciting twist and turns to keeps the viewer alert throughout most of the movie.

The movie starts in a homely Texas city, right on the border between Texas and Mexico. Jack Bishop (Simon Baker) is a soccer coach, and portrayed as an athletic and supportive dad to daughter Toby (Chloe Moretz). His new wife, Amaya (Paz Vega), is serving water to the other soccer players, and Amaya’s brother Casper (Michael DeLorenzo) is clothed in police garb cheering on the team. After the game, Toby wanders off into a back alley where she comes upon a gathering in a run-down shack. The women are all in a group, and chanting in ceremonial tongue. Toby sees a pyramid-like snow globe that she picks up, and hides under her shirt when her father comes to find her.

After this curious encounter Toby has with the cult-like group, she goes to sleep staring at a picture of her mother Katie (Claire Forlani). The next day, Toby is mysteriously kidnapped. Jack is distraught, and instantly hires law enforcement to track down his daughter. The process is painstakingly slow, and Amaya tries to influence Jack into using the La Santa Muerte religious teachings to help find the missing girl. Jack is reluctant at first, seeking help within the Catholic Church and holding memorial vigils in Toby’s name. He finally gives in to Amaya’s pleading, and they go off to a congregation of La Santa Muerte members. They meet with an old, blind Mexican woman (Julie Vera), who has visions that Jack does not want to understand.

After some time, Amaya starts to get suspicious of Jack’s disappearances every once in a while. Jack’s past of course is catching up with him, and soon enough his new life is revealed to be a cover up of his past involvement with Mexican gangs. After being wrongly accused of a death down in Mexico, Jack is thrown in jail but cleverly escapes by dressing as a transvestite. He rents a room, and sets it up to interrogate the man he knows kidnapped his daughter. Jack is brutal with the man, and beats his face so hard that blood is splayed all over. Jack’s mission to find his daughter is filled with murder and deception, which Jack must overcome not only his past but the future of his small family.

Jack’s transformation for a homely soccer coach to a knowledgeable, deadly con is very well played, and emotionally striking. Toby is forced to go from knowing nothing at all to learning everything in very little time, which is surprising that her character takes everything very well. She is calm, and will to participate in cult activity of the La Santa Muerte. There was a lot of use of Spanish language; practically ¼ of the movie was Spanish dialogue, which wasn’t very user friendly for me since my DVD did not have subtitles on it. The darkness and twists of the movie kept the plot going, and I really enjoyed learning about this La Santa Muerte cult that I was never aware of anything like this being around. Also, the portrayal of the two different cities on the Mexican borders were exact opposite was really interesting. The Mexican city was very colorful, filled with prostitution and strip bars vs. the city of Del Rio, Texas filled with All-American families and calm.

Dror Soref’s Not Forgotten is a must see for anyone that is interested in religious teachings from a different culture. The adrenaline rush of vengeance against the con that kidnapped a child also drives this move into an intense conclusion. The result of Toby’s coming of age story leaves the viewer questioning, what happens next?