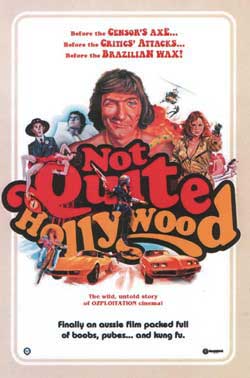 NOT QUITE HOLLYWOOD is the wild, untold story of “OZPLOITATION” movies – a time when Australian cinema got its gear off and showed the world a full-frontal explosion of sex, violence, horror and foot-to-the-floor, full bore action! Jam packed full of outrageous anecdotes, lessons in maverick filmmaking and a genuine, infectious love of Australian movies, NOT QUITE HOLLYWOOD is a fast moving journey through Aussie genre cinema of the 70s and early 80s – an unjustly forgotten cinematic era unashamedly packed full of boobs, pubes, tubes… and even a little kung fu.

I can’t think of a better done film documentary to mind than the recent viewing of “Not quite Hollywood”. Even when the word documentary is mentioned, we already have it in our minds what the film will entail and how it will play out. I stuck this in not bothering to read the synopsis to see what it was about. Instantly we are graced with some of the coolest intro title sequence work I’ve seen in awhile. This is a sure sign of a decent production that has the money to spend on title work. The good news is that the film gets even better after that. The critics referred to them as smutty. The fans couldn’t’ t believe there eyes. While films like Mad Max went down in history as cult classics, other releases simply either were dismissed as exploitation garbage or never really made there way across country into the hands of the mainstream markets.

A a genre filled with as many oddities as bonuses, the Australian film market has alot to offer. Directed by Mark Hartley and edited by Jamie Blanks, Sara Edward and Mark Hartley, this film is a whole mess of dirty fun, with plenty of old school bush to get your thrills.

Equipped with some rather clean, fluid and dynamic editing work, NQH moves at a perfect pace as it dips back and forth between interview segments, clips, trailers, and motion graphics. As they call it in the film we are on a ride into the world of “Ozploitation” which basically means the film work of Australian exploitation films. Tarantino a big supporter of the genre, was kind enough to contribute his thoughts and opinions on the former trends as well as several other great filmmaker appearances. For those who don’t know much about the film work you will get a great introduction and overview of products and craziness that went into these gems. Many filmmakers point out that these films are more or less a celebration of flesh, strange, obscene, disturbing and the embracing of rebellion. Now for you horror fans, there’s plenty of content to please featuring over the top gore, violence, extreme craziness and moments you have to see to believe. Alot of the content presented are from trailers and scenes from films. Though I have to say that although I’ve never seen any of these titles,

I’m surely more prone now to seek them out. Australian cinema has gone through many transitions, though it’s the older exploitation films that really this film is about. Titles such as “Midnight Spears”, ” Return of Captain Invisible”, “Night of Terror”, “Blood Moon” and “Dead End Drive In” give you all that Ozploitatiuon and more. As Taranitno points out, you really live for those outrageous moments that surpasses all that you’ve seen.

This was the heart of these films. From a humorous point of view, alot of the directors interviewed actually thought the worst of these and dismiss them off as embarrassing moments, though somehow there’s a certain appeal that even with that said is intriguing enough to investigate further. From a time when censorship was high and the film culture was repressed these little bad eggs still found a way to sneak under the radar using the R rating tag. Nudity and obscenity was pretty much a norm and part of the appeal for the on screen experience. Car chases were some of the best ever created on screen and horror was given new deviations to poison your minds with plenty of gore and Macabre.

NQH is more than just a trailer showcase. It’s a tribute with benefits. Magnet Releasing knew a good product when they picked up this one. Definitely a killer documentary and a great film in itself, highly entertaining for too many reason to mention!

Tags Not Quite Hollywood