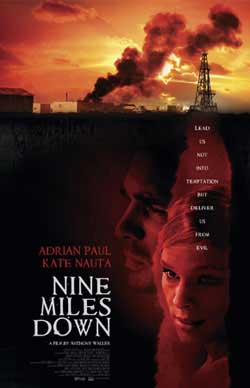 In the Sahara desert, a sandstorm batters a deserted drilling station. Thomas “Jack” Jackman (Paul) a security patrolman, battles through the high winds to find out why all contact with the station has been lost. Originally built for gas exploration, and then abandoned, the site had recently been taken over by a multi-national research team intent on drilling deeper into the earth’s crust than ever before.

It was some time ago, that I remember reading about this. As absurd as it sounds it also makes perfect sense if you were to contemplate the notion. A drilling team digs so far down that they break thru a crust and hear sounds coming up that sound like screams from hell. I thought this news report to be something you’d expect from National inquirier…but hey…you never know right? One thing is true… we really don’t know the extent of what lies in our own earth’s core.

Our movie titled “Nine miles Down” approaches this concept though not as clear cut as the news report alludes to. Adrian Paul plays Thomas ‘Jack’ Jackman… a security guard who is sent out to a remote testing facility to check on the residents. North Africa, Sahara desert sets the location for this testing facility which housed 25 people. On his arrival he discovers that all 25 are missing and the place is deserted. What is left is a few walls with blood written text proclaiming “save yourself”. The rest is in arabic that is transcribed as something about a “devil woman”. A slain calf is found in a blood drawn circle.

Jack signals back that the place is uninhabited which warrants an investigation. Upon leaving a women comes running out of the distance. This alluring lady is Jennie Christianson (Kate Nauta) who claims to have been the sole surviving scientist. Jack decides to stay a bit longer even against her suggestion not to, to dig further into the facts and what occurred. At first she is stand off-ish about the whole deal but later reveals that they dug into the earth mantle and may have released something. Recordings sound like screams and apparently the male doctors all went crazy committing suicide and murder.

Beliefs point to perhaps a breaking into a literal hell beneath the earths surface, thought they are weighed against logic and the isolation factor. Jack starts to become suspicious and has reoccurring delusions. All of them horrific, blood filled and littered with demons influenced by his belief that the hole may be indeed some kind of hell portal. Jack becomes paranoid influenced by these visions and begins to suspect that Jennie is not what she seems. This of course is after they hit it off, build trust and make love a few times. Though we could anticipate that from the getgo.

Directed by Anthony Waller, the film seems to be in pretty capable hands. The story is strong and does most of what it sets out to do. There has been actually about 2-4 desert located horror films this year, so it seems to be somewhat of a trend. I wouldn’t put this film above the even creepier desert film “Red Sands” but might call it better written than the lame “The Devil’s Tomb”

The movie rolls along at a great pace that instantly made me think of the film “Event Horizon” but set against a desert instead. The build up is similar that keeps you pretty engaged into where this is all going. As the film progresses it tends to sometimes get lost into the madness factor which leaves the 3rd act a bit vague. WE do reach some conclusions on what and why …but there is a bit of ambiguous that in my mind went unanswered. I did miss the reason why Jennie wasn’t as affected the same way, though they may have mentioned this in passing that I didnt catch.

The setting itself provides a perfect choice of isolation that enhances the creepy nature of the film. Creepy is a perfect description for the film with its spats of paranoia and possibilities. Whether this films nails the hole into hell concept remains to be seen as I still believe the concept can be explored further. In this instance they employ scientific means which I leave up to the viewers if they feel it works or not. I’m gonna leave this one at “creepy and engaging” but not perfect.