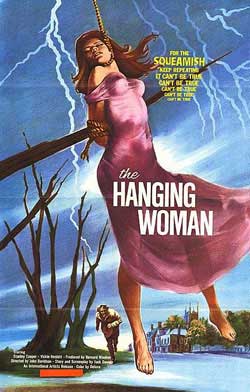 Paul Naschy plays a supporting role as a deranged gravedigger in this zombie movie, set in a small highland village in 19th-century Scotland, where a stranger’s arrival to claim an inheritance is met with apocalyptic visions and other evil omens. The town unearths a crypt full of horrors, including a devil-worshipping coven and throngs of the living dead.

The Hanging woman is a 1973 film that was recently restorated under Troma films for a 2009 re-release. The original film also was known under the names “Orgy of the Dead” and Return of the Zombies” though for the life of me cant see why they would want to label it under those titles. The original spanish name of the film was listed as “La orgía de los muertos ” Directed by José Luis Merino, the movie is largely a murder mystery more so than a straight horror film. The film is also one of the several films that featured popular horror favorite Paul Naschy in a supporting role.

As the story goes Count Mihajli has died and left his estate to his heirs. Serge Chekov (Stelvio Rosi) arrives into town to find out what was heired to him. On his trek thru the country at night he is warned to stay indoors and that strange things occur in the darkness. Reluctantly, he walks about and discovers a woman hanging in the graveyard. This of course leads to a local investigation to find out if the woman was murdered or committed suicide. Nadia Mihaly, is the rather alluring redheaded owner of the estate who seduces Serge when he becomes owner of the estate per the will.

Paul Naschy plays Igor who’s referred to as the local gravedigger, who seems to have a rather odd obsession with the dead and keeping many of the deceased female corpses in his underground lair. The film tends to get a bit confusing at times as to where this is all going.

I was really expecting the horror aspect to be a bit heavier but it takes a while to get there. We learn that Doris’s father has been allowed to stay on to keep his experimental studies going on reanimating the dead. This has allowed him to construct a lab on the premises. When we learn of this early in the film, we find he’s been experimenting with reanimating frogs, however we learn later that it’s much more involved than lead ti believe. Dead corpses come alive and awaken from the underground catacombs that run directly under the house.

These catacombs also serve to extract recently dead bodies as they are buried for use in the doctor’s experiments. By the 3rd act we have dead folks coming back to life and answering to the orders and commands of the good doctor. Prior we find Serge has been set up from the start to take the fall for the series of murders that have occurred. As mentioned before, clues are unveiled and disclosed in the final act as the mystery is fully disclosed. The extent of the horror comes in the context of the film though is light on the most part.

We do get zombies, murders, devil worship and plenty of graves but its a bit on the light side for the 1970’s hard core films of that era. Maria Pia Conte who plays Nadia Mihaly and Dyanik Zurakowska as Doris Droila are both stunning ladies of the screen who really light up the screen.

Viewers might find Stelvio Rosi a bit humorous at times as he seduces all the women in his house stud role. While I am sure that his hairstyle was all the rave back then, his Starsky and Hutch look is a good candidate laughs as well.

Restored under Troma film, the transfer is only somewhat adequate. The sound is improved but the picture largely still resembles a direct from VHS transfer. Also I was surprised that the editor didn’t take the time to de-interlace the footage to free it from the digital comb lines that are evident.

The Hanging Women,at least to me is no classic but it does have its peculiar 70s vibe that still makes it worthwhile. I would have liked to have seen a better transfer job, but it does have alot of extras included that balance the package out nicely.