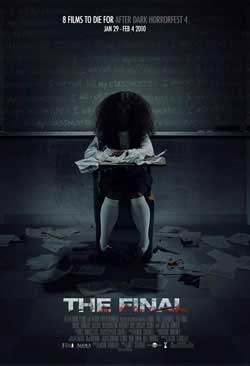 The final is one of the After Dark “8 films to die for” series offerings of 2010. Directed by Joey Stewart, The Final is actually one of the better contributions of this series I’ve seen so far. The film takes a familiar notion of teenagers in high school who had to deal with being bullied all their lives. With this comes the stereotypes of youth, the bullies, the jocks, the geek, the cheerleaders, the quiet types, the foreigners and the beaten down. In fact, the set up will have you making quick comparisons to life in the “Breakfast club” and every other 80’s released high school film. Though there is really isn’t any humor in this version. We get plenty of character build that focuses on the day to day torture these kids have just trying to get thru the day hoping that staying low profile will save them. As they say, strength comes in numbers and that is the intent here.

Cleverly the film begins in on an abstract note of a female who walks into a diner who has suffered public humility due to some kind of former accident leaving her face scarred and deformed. This segment is strong but might have you wondering at first where that fits into the scenario of things. No worries ….you’ll learn.

Dane played by Marc Donato is the self appointed leader of the geek squad who has decided that enough is enough. His friends all properly quiet and reclusive have joined at his side in their hatred towards the “others” of the school. Not everyone of course, just those who get pleasure out of torturing outcasts types like him and his friends. The culmination furthers as the “popular” group make jokes, laugh, insult and play with the outcasts to their amusement or as much as they can muster. As we say in the business, the sh*t’s about to hit the fan.

A party is planned….one that has all of the cool kids scurrying about to attend. A costume party no less that as we find quickly is actually thrown by the outcasts in anticipation of payback. At this point we can start guessing that perhaps a “Carrie” moment or scenario might work it’s way into the script, though what the writer Jason Kabolati has written in is far worst than simple pranks and embarrassment gags.

Adorned in masks, odd costumes, and a voice articulator….. the team carries thru with the plan by lacing the punch with some sort of knock out serum. This is enough to stage the event with all the attendees waking up to being padlocked and chained in a group. At first we cheer for the underdog as they have clearly “punked” the group and have the upper hand. Though we learn that the team armed with rifles and shot guns have concocted a far more devious plan than just embarrassment. Yes, as the leader states, he has planned there fate his whole life since being abused at an early age. The stand out abusers get the worst of the geek team’s wrath.

I believe there is alot of really good payback moments and slight ode to “torture p*rn” that needs to be experienced as a viewer. I found alot of my anticipation was in the “what are they gonna do next” premonitions especially for the worst of the group. Film lovers and horror fans will love the inventiveness of the team and how they become empowered in a complete turnaround. There is a relationship that we all will share even on a minor level with the turn of events. No it’s not quite Columbine, but it is a different way to approach the years of abuse. As one of the female outcasts states….”all you had to do is be nice to me, I’m sure you would have really liked me”.

This statement is chilling when it’s put into the perspective of …it’s much too late now situation, though we hope the cruel kids will at some point rent this film just in case they might have a change of heart. The main characters consist of Marc Donato … Dane, Jascha Washington …Kurtis, Whitney Hoy … Bridget, Justin Arnold … Bradley, Travis Tedford …Andy, Julin … Heather, and Lindsay Seidel as Emily. It is a drama, thriller, and horror film all in one. “The Final” is powerfully harrowing bringing viewers into the horror rather than as a mere spectator. Whether your young or older something about this film and the thought of retribution are right on the money.

Tags 8 films to die for After Dark The Final