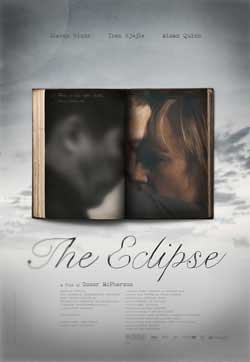 In a seaside Irish town, a widower sparks with a visiting horror novelist while he also begins to believe he is seeing ghosts.

Throw in plenty of drama, a few ghosts and some vacationing writers on tour and you have yourself a helping of “The Eclipse”. The funny thing I was thinking after the filme moved to final creditswas…. is horror just as effective if it’s used in very small doses but still creates a worthy jump moment or is it better served up coming at you on full throttle? With that thought I came to the conclusion that the horror aspect of “The Eclipse” was very small and used sparingly. In fact by all standards it wasn’t a horror movie but rather a dramatic thriller based on love interests, celibacy and the passing of loved ones. I’ve seen plenty of good things said about this one, but for me it was a bit too light for my viewing tastes.

We have widower Michael Farr, who’s job seems to be to entertain and transport guests as they arrive. Lena Morelle (Iben Hjejle) is a bright, talented writer who is promoting her recent release called “The Eclipse”. It is a book documenting her encounter with a supernatural spirit. On the a-hole side of things, Aidan Quinn plays Nicholas Holden, a well known author and best seller writer who is also in town for the visit.

They are attending a writer convention and it seems that the 2 have a previous romantic encounter that has fueled Nicholas to arrange for being in the are at the same time. Obsessed with Lena, he is on the brink of separation from his wife with the interest of re hooking up with Lena for the duration. Ciaran is the innocent, likeable Irishman who is just doing his job and looking out for his clients. An attraction is undeniable to Lena as well but regardless he is just trying to provide the local support that she needs.

Ciaran is also trying to deal with the death of his wfe and his now dyng father who is confined to a nursing home. But at the core something else is a brood. Criain keeps hearing and seeing a ghost figure in his house to the point that his curiosity has prompted him to investigate on this notion. The figure though seems to be the result of not one but 2 spirits One that is lurking and one that is haunting him with frightful result. Again this notion is very limited and in many ways provides a just enough creepiness to make this a ghost thriller.

It seems though the story is bent more on the idea of romance, longing and and the lives of traveling writers than anything. For this …..”The Eclipse” is a better choice for housewives who want a subtle horror viewing than what’s in the norm today. The romance will keep them glued to the story and the scares will hit them hard when they least expect it. Conor McPherson directs this story that was filmed within Count Cork, Ireland. For this, it’s an absolute beautiful local that might inspire others to just take a needed trip to.

Iben Hjejle provides the love interest which seems more distracted by it all than embraceful. Aiden you’ll love to hate as his narcissistic, ego drives his character with pompous esteem that makes you want to hate rich writers even more. The film has won 5 nominations and 5 wins for a variety of talent callouts. This fact probably could have resided on not having any horror at all to still carry it thru, but the addition of ghastly corpses …here and there provides just a sprinkle of scare to put the whole thing on edge. I recommend this to a lighter audience who are looking for small frights within love story dramatic encasings.