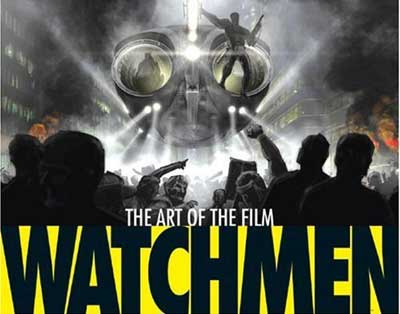 Like other fantastic books by Titan, this large hard covered volume is no exception. It’s  brilliantly constructed with a whole lotta of coolness going on. The Watchmen in itself was a pretty inspiringly odd film. It is superhero fan fare presented from a different era with a different take on life from within the comic book galaxy. As I reviewed the book, it was very clear that “Watchmen” is in a world of its own with its own set of rules. Far from the Marvel or DC universe that we grew up on, Watchmen is a bit of fantasy, a bit of surreal and a bit of realism. Real folks with real lives and real problems. Oh, ya, they also happen to be self appointed super heroes. The book captures alot of this energy by presenting it in full color, in this sufficiently packed coffee table book.

What is apparent right off the bat is the attention to detail the filmmakers gave to this production. In fact, some of the original schematics are included that showcase the devices used, the weapons, the costumes and the flying devices. Major, major work here, that is beautifully captured in this hard cover edition. Usually I’ll take the time and read thru all the production notes, but in this case, the imagery immensely outweighed it with all sorts of behind the scenes shots. It’s a wonder with the level of FX needs that this production ever reached completion. However, it did and is quite a film to behold.

I’ll try and sum up the content inclusions: Alot of sketches, story boards, art boards, original art, photography, props, comics, drawings, set designs, on location shots, actor profiles, consumes stages, 3D renderings, and even hero dolls. It is clear that there was a franchise intended here. How that trickled down seems to be more a product of dedicated fan boys and maybe less about total consumer interest. Some of the work that is featured here was actually less visible in the film itself. Early concepts on the former 1940’s Minutemen are explored more in detail drawings and conceptual changes. The layout is dynamic and captures the era of the Watchmen with page to page features. An entire chapter is dedicated to the “owl ship” alone. Other sections discuss and present the costume variations up to the final movie inclusions. Watchmen yellow popping out at every corer, the book finishes nicely with a collection of advert posts featured for the film. Hey, there’s not much more to say here, if you loved the film, you’ll want this book near. It’s a perfect souvenir to a well loved movie experience