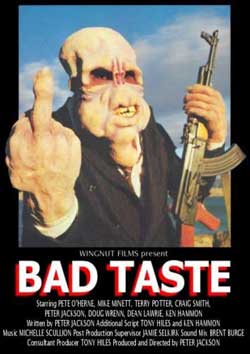 “Derek and his friends must investigate the missing people in a small village. Then they find out its human formed aliens that are really big headed monsters that used all the people in the small village into there snack burgers. Now, Derek must save the day and the world with his chainsaw before the meat eaters strikes the whole planet. Will Derek kill all the aliens?” (courtesy IMDB)

This week I have a special treat for you. From the man who brought you thousands of Uruk-Hai rampaging across the majestic plains of New Zealand, from the man who put a giant ape back on the Empire State Building where he belongs (well, they could scarcely put him back on the World Trade Towers, now could they?), and from the man who gave a hippo a machine gun, comes Peter Jackson‘s first feature film, Bad Taste (1987), and let me tell you, I finally have the opportunity to discuss a film that lives up to its title. I hope you still have that sick bucket left over from last week’s Creepers (1985), and I certainly hope you’ve emptied and washed it out before now.

Check out Trailer for 1987 Bad Taste 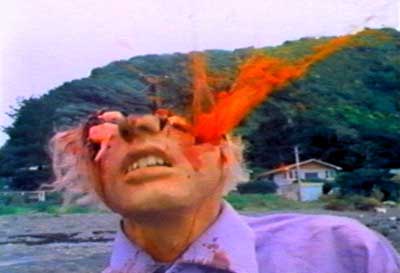 If you’ve ever watched a film and thought “What this needs is more exploding sheep” then this is the film for you. Of course, in New Zealand this film is classified as Violent P*rnography – and I think that will be the last connection I draw between sheep and eroticism this week, don’t you? At least while I’m sober. Relatively. So what can I say about Bad Taste that isn’t self-evident? Like many classics of modern cinema, Bad Taste was banned in Queensland, until the censorship board was disbanded in the nineties (that’s the nineteen-nineties) in a unique ruling that had declared itself obscene. 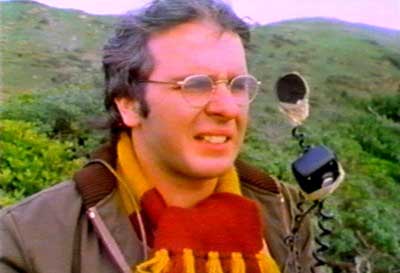 Out of all the low-budget films I’ve discussed, Bad Taste is the one that demonstrates that all you need is some film equipment, your friends and family, and about 180 free weekends. In fact, the filming went on for so long that Craig Smith the actor (in the Pia Zadora sense of the word) got married and divorced during the filming. He disappears for a while because his Christian wife didn’t like him working on Sundays. So Peter Jackson had to expand the role of an actor he knew would show up – himself. Fortunately, other directors haven’t followed his example. I mean, thank goodness Janet Leigh was always on-set for Psycho (1960), or things would have got real ugly. 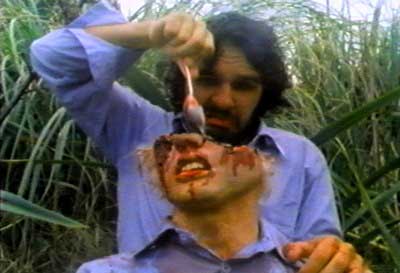 Of all the cast, it’s only the voice of Lord Crumbe, Peter Veer-Jones, who ever worked outside of a Peter Jackson film. He worked in such classic New Zealand television shows as Shortland Street, Hercules and Xena. Some of the cast appeared in Jackson’s second film Meet The Feebles (1989), or as it was known in the United States, Muppets On Ice, and had worked on later Jackson films. For example Terry Potter, who plays Barry, can be seen in Lord Of The Rings: The Return Of The King (2003) as Man Of Gondor #537, but otherwise they were doomed to endless Bad Taste reunions at New Zealand science fiction conventions, which are kind of like Star Trek conventions, only attended by vertebrates. 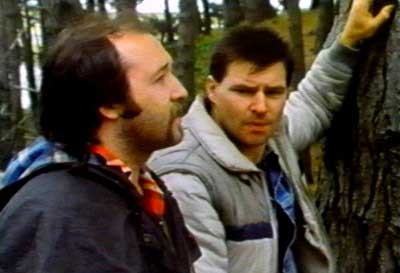 Peter Jackson has always wanted to make a sequel called, strangely enough, Bad Taste II, but only after he finishes his four-hour adaptation of the Henry Lawson poem The Loaded Dog. At the moment he’s rumoured to be producing a movie version of the popular computer game Halo, making him the first Academy Award winning director to produce another entry in the pantheon of films such as Double Dragon (1994), Super Mario Brothers (1993), Mortal Kombat (1995), Resident Evil (2002), House Of The Dead (2003), Alone In The Dark (2005) and Doom (2005), putting him up there with such great directors as Paul W.S. Anderson and Ewe Bolle. But he wouldn’t be the first Academy Award winner to work on a video game film. Raul Julia beat him to that with his stirring portrayal of General M. Bison in Street Fighter (1994). Of course, Jackson has already experimented with adapting video games with his follow-up to the Lord Of The Rings trilogy, Donkey Kong (2005). 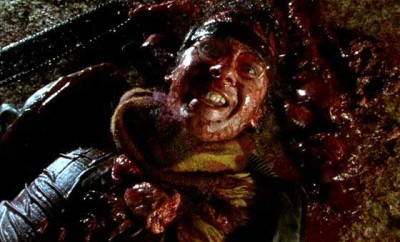 If making Bad Taste had taught Peter Jackson anything, it was you can get away with a lame story and no real actors, as long as you can smear special effects over the top, thus insuring his inevitable Hollywood career. Now it’s time to change the sick bucket, and time to bring this to a close. I’ve been Nigel Honeybone, and now I’m off to get a fresh bottle of Absinthe and a mop. Toodles!