Book Review: The Choice – Using Conscious Thought and Physics of the Mind to Reshape the World – Author Mike Bara 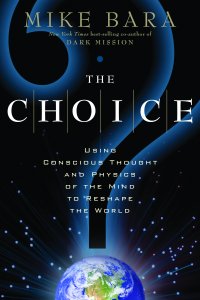 The Choice: Using Conscious Thought and Physics of the Mind to Reshape the World

By now if you have been keeping up with the literary reads on current events, subjections, projections, and new age concern, you have most likely been thru a dozen or more books that try and break down the metaphysical change that is just beyond the horizon. The book seems to start at by appealing to a certain consumer awareness with the talks of “The Secret”. Which in simple terms is getting what you want by wishing for it and then acting on those wishes. Author Mike Bara pulls us in with his versions which he is calling “The Choice”. Though even if that may get you thru the front door, there is alot more discussed here that deals with the universe, God and speculation on the order of things.

I wasn’t sure what I was going to make of it as he starts the book by claiming that “Dark Matter”, “Quantum physics”, and the “Theory of relativity” (more or less) are basically all a bunch of hog wash. As for one, I am a firm believer in the things that” The Choice” tries to disprove. But moving on, it’s his perspective of things that actually proves to be very interesting. The universe is called out as an organized system, rather than the chaos we might assume. He points out the space between planets and the missing 5th planet which is now reduced to an asteroid belt. He also throws in facts about the peculiarity of the moon distance from us and its perfect size to keep a necessary balance of life on our planet. All this is intriguing and certainly makes you think about what it “all” means. Mike Bara is certainly an educated guy, there is no denying that. Because of that though the book starts in a more metaphysical realm and progresses very quickly into the scientific. The paradox here is that the science is aimed at disproving the science to bring us back to the metaphysical. He cites some of our greatest scientists and ways of thinking as all seriously flawed which is a rather bold statement to make.

Bara bases his studies on a 3D reality and a presumed theory of a 4th dimension. Though while he educates us he also in the same breathe contradicts and disapproves all that our current understandings of science has lead up to. I’ll admit, I’m no scientist, or quantum physicists myself, so I couldn’t win an argument over the content. But I also don’t believe that “everyone” is wrong and Bara really has all the answers. My prediction is that this book may do more damage to the authors credibility than intended just on that alone. Quantum psychics, the theories of gravity are all dismissed so easily that I just cant by into it as easily as Bara claims it to be. I found myself .25. percent listening to some of his research and .75 percent just shaking my head over his claims. The content as a book is actually recommended more for educated readers who might better understand some of deeper arguments Bara makes. This is no replacement for the “the secret” even though it tends to market itself that way. The content is overly scientific based on astrology, astronomy and physics explanations that one might find themselves falling heavy with glazed eyes thru most of it. In fact the mid content is the thickest. Though based on the marketing for this most readers will want to read the first couple chapters and then skip to the last few to get what you came for.

The final chapter discusses 2012, but does it a not so technical manner. In fact it also in the same breath, puts down 2012 researchers, “the secret” book and most of the 2012 clams made up to date. It also reaches its true purpose at this point with it a preachy religious tone in the classic…”get with God or get off” approach that while is meant to be good natured is also very cynical.

Bara is an excellent researcher and author that is also consumed with arrogance. “The Choice” lacks alot of consumer appeal in its writing. And by that, I’m referring to being able to be “consumed”. If you are a fan of New Page books collection, this one might just make you more angry than enlightened. I for one am not about to just write off a few of my favorite new age authors hard work and throw it all down the drain just becasue Bara doesnt see it in “his” world. Approach with caution, an open mind and perhaps don’t believe everything you read here.

First ‘The Secret’ – get ready for ‘The Choice’