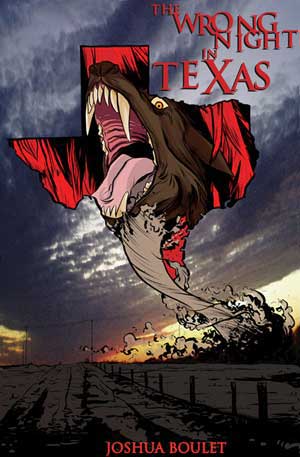 John and Sarah are about to be engaged. John is also about to head out to see his mother who he hasn’t spoken with for 7 years due to family complications. Off to Texas…Woodsville to be exact , John heads out to visit his mother, announce the news and well…… purify his background a bit. Though something isn’t right in Texas as a series of attacks that are pointing to animal attacks has broken out in the small town and has the area spooked.

When John arrives, he is greeted open arms by his mother who takes him in to reminisce about old times. Much to John’s surprise when he awakes, Sarah has also decided to make the trip down there to be with him.

As they drives thru the wood filled town, reports begin to come over the radio about the incidents. It also doesn’t help that upon arrival John passes by a freshly mutilated cow carcass. Though it’s when they decide to visit some distant cousins that things really ramp up. With a tornado threatening the area, a huge storm brewing and a group of backwoods cousins that aren’t too savvy on the manners, John and Sarah just try and get thru the night. Though what they didn’t expect is when one of them turns werewolf and starts attacking everything in site. When the werewolf goes after cousin “Bull”, he forgets to finish the job producing another werewolf adversary. The remaining is a fight to the death with page by page bloody werewolf action.

“The Wrong Night in Texas” is authored and illustrated by Joshua Boulet under Soldier of Fortune printing. The TPB is impressive with is quality glossy pages and heavy inked artwork.

Joshua has knack for horror comics that explode with blood drenched pages of modern Werewolf lore. The detail is kept minimal, but what works for this book is the choice of perspectives and panel designs. Fans of werewolf and monsters will really dig this one under it’s well thought out story line. The story itself almost reminded me of past werewolf driven “Night Gallery” tales. Though in this case the violence is at a much higher pace and execution. As the back cover goes on to say “A horror story that stays true to the genre”…..this one does exactly that. A fine read, not too wordy and lots of wolf slashing actions going on, cool stuff!