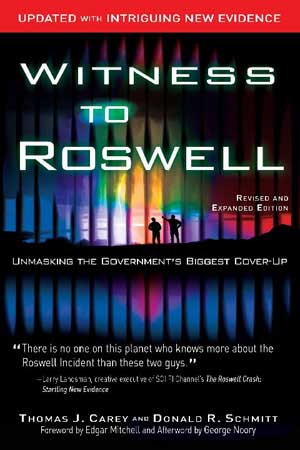 As a ufo conscience society, the biggest cover up to date has been the stories surrounding the Roswell incident. Authors Thomas J. Carey and Donald R. Schmidt have spent numerous hours researching and gathering evidence to present one of the most compelling reads on the subject to date. As explained in the book, we get the full overview of what happened, how it was covered up and the stories of all the folks and evidence that was either denied, erased or removed. While the book reveals as much as it can provide to date, the fact that most of the original witnesses from that era are no longer with us only adds to the immediacy of uncovering answers to a highly known government sham that still intrigues to this day.

You’ll find inside how the stories were changed, how the reports were modified and what went on behind the scenes to secure secrecy. Roswell, an area that was witnessed by several if not hundreds of locals who know what they saw and still to this day stand by the facts. The facts as told are, a crashed spaceship, bodies, and a survivor.

We hear about the famed “mystery” metal”. A metal alloy that is described as indestructible and form stabilizing. This book is no work of fiction as these authors much like fox Mullder from X-files claim that the truth is out there and needs to be unveiled.

What’s all this talk about the “Mogul Balloon”? Well as the book states, the cover up went to great lengths to suppress any leaked info by deferring the content to other technologies as a response. Though what is interesting is the tale of the folks who witnessed events 3 to 4 days earlier “before” the intelligence got wind of it. Metals taken and pieces of ships looked over. This was no crash and cover up experience, these folks knew the details and were then threatened shortly after in fear of there lives not to disclose.

Call this a horror story if you may, the book is harrowing in its factual collections of such events and the folks who spoke up finally at there day’s end. As the authors take us through the circumstances surrounding the witnesses and reports they attempted to come forward with , we are told of many occurrences where the reports given were retracted, denied or changed by persuasion of government involvement. We are told about entire families threatened to be killed if they spoke and even instances of bribery or payoffs to keep quiet.

While I found all this fascinating it began to wear me down after a while as if I was repeating the same situations accompanied by different names. What though was remarkable was how fast individuals, radio stations and news stations were silenced and threatened concerning the events. Whatever the true nature of the findings in Roswell were, it is clear that it was strongly enforced from getting out. We hear many reports both what they called the “memory metal”. In fact so many that it seems unlikely that it was a notion of fiction.

Earlier times talk about the days the military , FBI and associates came in cleaned the entire area and then ransacked house nearby in search of any recovered artifacts. While this remarkably resembles a scene or 2 from motion pictures, this was the true story told of those times.

As you make your way though the numerous pages of historical recovered reports and even gaze upon death bed confessional and classified documents, the thought that stays with me to this day is where are we now with getting a real uncovering of the past? Is the recovered spaceship a potential aid to new technology today? What and how will days ahead finally come to terms with extraterrestrial life forms?

The book is well written, factual and yet intriguing. While I firmly believe in the existence, it’s reports such as these that help to fit the pieces together. It also sticks to your gut with the sole question of why the secrecy? What don’t they want us to know, and for what reason? I believe this is not a book for only UFO seekers and extraterrestrial junkies but an informational lesson and a lesson in government suppression of facts. A major plus to readers is a well told narration of the facts in a way that doesn’t overload every page with too much at one time. You are taken through the events with style, finesse and purpose.

Check out other books at: New Page Books