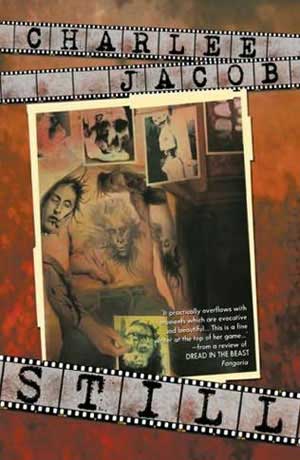 He did know that the dictionary definition of ‘still life’ referred to a portrait of inanimate objects- flowers, fruit, furniture. Nothing alive, that is. And it cut him to think that this was what the person in the picture had been reduced to: and object.”

If you’ve read anything by Jacobs, there is no point in outlining the wonders that lie in wait here. Then again, if you’ve read any of her stuff then you either already have this or your taste sucks donkey nuggets. If you haven’t, I have a hard time wrapping words around the arcane magic of beauty and horror that this wonderful lady weaves. As usual for her, a simple synopsis is not easy to pull off, as we follow three apparently distinct tales. However, unlike some of her other works, this is one comes across a tad easier on unaccustomed readers since the stories stay pretty well to themselves until they are all tied in together.

We’ve got a cop, Zane Mcfadden, that has become obsessed with answering the calls of victims of the foulest forms of human degradation to the point that his family life, work and sanity are crumbling under the weight of his inability to solve their cases. We’ve got a horror fan (Peter Beta) who, many years later, receives the first guy’s scrapbook of death and dishonor who begins displaying moving pictures of the victims final moments. Finally, we’ve got what could very well be the perfect assassin (dear little Pearly). I know that you’re thinking from this over-simplified synopsis that this could very well be a Dean Koontz book but trust me when I say that there is no way that Charlee will let you off that easy.

Beneath it all is an exploration of human cruelty and degradation that manages to be even more shocking than what we saw in Dread in the Beast by grounding the violence in a more believable setting (until the final sequence, which goes totally for broke). This is, after all, a book about purely human evil and it delves into the worst forms of it without blinking. I know that she hates being referred to as Hardcore, largely because of the p*rn implications, but this novel is the epitome of what the movement is to me. Her exploration of human horror of the past as well as present, including the use of several real cases, works as a total attack on the myth of a lost time of human innocence of a current state of civilized perfection. People have always done and will always do incredibly f*cked up sh*t to each other, that old inhumanity of man to man saw, and she is rubbing our noses in it.

Her writing style here is also more direct, kind of like what Tom Piccirilli has been doing with his more recent work, taking away the shelter of the beauty of her words. Further, her now expected accompanying artwork is starker than usual, very pictorial in grim black and white. Make no mistake, this is a book that intends to wound, but she never leaves you bleeding. There is hope here, though it is found in paces few would bother to look. This is a woman who has taken the horrific into herself, made it a nice cozy home and still manages to dream of a better world. There is no way to not be in awe.

I also have to credit her with providing me with the best defense for a love of horror against those who think such things evil without resorting to psychobabble and excuses.

We’re lucky to have a talent like this among us.