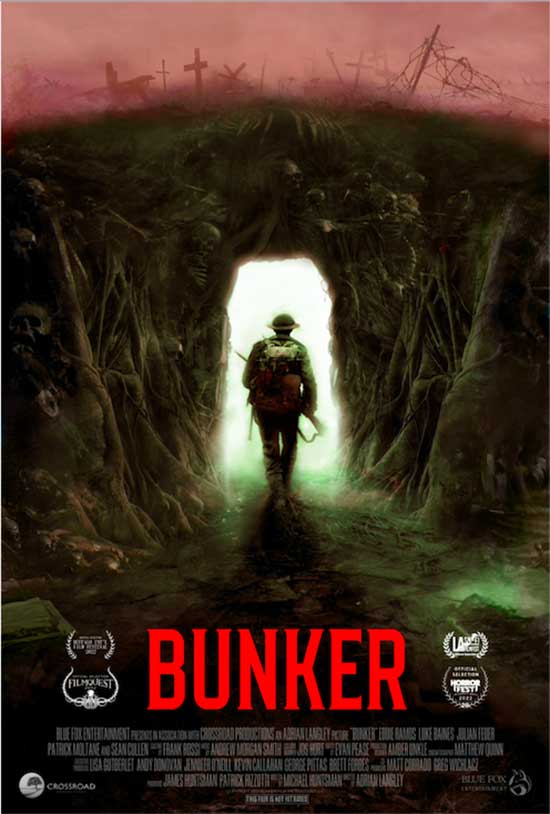 Blue Fox Entertainment is excited to announce that the highly-anticipated WW1 genre thriller BUNKER will be opening in theaters only February 24th!

Set in the waning days of World War I, BUNKER tells of an embattled group of American and British soldiers who are ambushed by the opposition, and must flee into a bunker with a German POW in tow. It’s as they travel deeper into the earth that they realize a greater threat has joined them… an ungodly presence that twists their minds and warps reality, experiencing the true hell of war.

Trapped in a bunker during World War I, a group of soldiers are faced with an ungodly presence that slowly turns them against each other. As paranoia and fear grow between them, the men experience the true hell of war.

“After developing this project for over 4 years, I’m so proud of the team we’ve assembled,” said Blue Fox Entertainment’s James Huntsman. “Adrian, Michael and Patrick together with our amazing cast and crew helped to create a unique vision we believe will entertain audiences around the world.”

Director Adrian Langley added, “WWI genre thrillers are very rare, and so directing BUNKER came with both unique challenges and opportunities. Blue Fox was exceptionally supportive of me and my vision for the film, and I think we’ve made something distinctive and imaginative.”