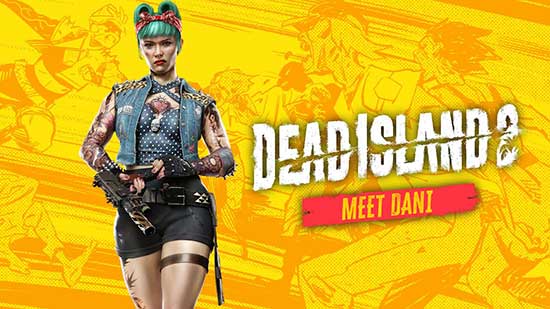 If you’re going to be traversing a hellish world filled with very hungry zombies around every corner, you should probably know who it is you’re traveling with. Well, it’s time to meet the slayers of Dead Island 2. Today, acquaint yourself with Dani.

Dani is all about takin’ names, breaking rules, and shooting zombies directly in the face, a worthwhile skill set to have in the dangerous world of HELL-A, to be sure. You don’t want to find yourself on Dani’s bad side, so make sure not to take her abilities for granted.

Want to know about some of the other slayers you’ll meet in Dead Island 2? Check out and download all previously released Meet the Slayers videos below. Don’t worry, Carla, Amy, Jacob, and Ryan are just as violent as Dani: www.dropbox.com/sh/rbmijg3h6ai6i0g/AACg4eY2JNZrDJcP4-yGM4dQa?dl=0

Dead Island 2 is an FPS action-RPG set in a hellish yet stylish and vibrant gore-drenched vision of Los Angeles, nicknamed HELL-A. The series’ unique formula, dark humor, and over-the-top zombie-slaying action returns with all the swagger and charisma you’d expect from the Dead Island franchise.

Dead Island 2 will release on April 28, 2023 for Xbox Series X|S, Xbox One, PlayStation®5, PlayStation®4, and on PC via the Epic Games Store.