The most famous of Universal Monsters are the Frankenstein Monster, Count Dracula, the Wolfman, the Mummy and the Creature from the Black Lagoon. Horror icons of classic thriller cinema are Boris Karloff, Bela Lugosi, Lon Chaney, Jr., Peter Cushing, Christopher Lee and Vincent Price. Modern horror monsters are Freddy Kruger, Michael Myers, Leatherface, Jason Voorhees and Pinhead. It is easy to see that the horror genre is a male dominated field of cinema.  Most of the female actresses are given the damsel in distress role or the final girl role: Fay Wray, Julie Adams, Janet Leigh, Barbara Shelly, Hazel Court and Jamie Lee Curtis. From time to time however, audiences were awarded a monster from the fairer sex. With perhaps the exception of the vampire bride, female monsters are a rare breed. Here are a few to consider for you next Halloween feature viewing. 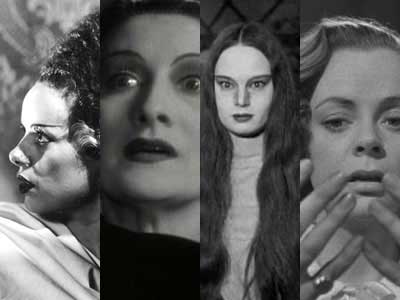 While horror is being dominated by Universal Monsters, The Bride of Frankenstein (1935) is the arguably the most famous of all female monsters. Portrayed by Elsa Lanchester wearing brilliant make-up by the legendary Jack P. Pierce, the Bride was introduced in the sequel to Frankenstein, again directed by James Whale. In the story, Doctor (Ernest Thesiger) Pretorius forces Henry (Colin Clive) Frankenstein to create a mate for the Frankenstein (Boris Karloff) Monster. Universal tried to repeat the success with Dracula’s Daughter (1936), starring Gloria Holden as Countess Marya Zaleska. Holden together with Carroll Borland as Luna Mora in Tod Browning’s Mark of the Vampire (1935) lay the foundation of the lead female vampire character for years to come. Universal also gives us female versions of the Invisible Man in The Invisible Woman (1940) with Virginia Bruce in the title role and the werewolf in The She-wolf of London (1946) with June Lockhart in the title role. 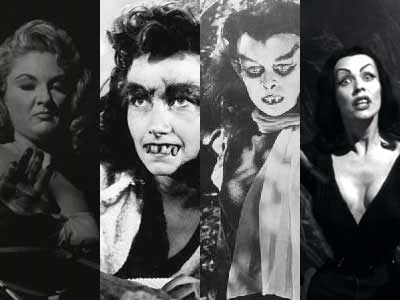 In the Fifties, gothic horror gets trumped by terror from Sci-Fi origins and audiences are rewarded with Attack of the 50 Foot Woman (1958).  In this B-movie classic, Nancy Archer (Allison Hayes) encounters an alien space-craft and grows to be a 50 foot monster. Toward the end of the decade, horror would rise again in popularity (due in part to the success of Hammer Films) and smaller studios, looking to put a spin on classic tales, would provide another turn at a female Frankenstein and vampire. In Frankenstein’s Daughter (1958), the monster is played by Sandra Knight who starts out as a monster-werewolf hybrid before being changed completely into a man-made monster. In a twist to the drive-in features such as I was a Teenage Werewolf and I was a Teenage Frankenstein, Blood of Dracula (1957) has a headmistress at an all-girls school hypnotizing one the young students into believing she is a vampire. She not only begins to behave like a vampire but take on the appearance of the creature of the night as well. Ed Wood hires TV horror host Vampira to appear in his z-grade absurd classic Plan Nine from Outer Space (1958). 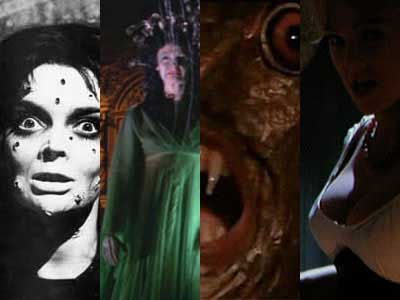 Hammer Films began making horror films in the late fifties and are a huge influence on the horror genre throughout the decade. Along with a multitude of vampire brides, the company also created some of the more interesting and unique female horror creatures to grace the screen. Among their entries are The Gorgon (1964) where Peter Cushing and Christopher Lee encounter Megaera, one of the three mythological sisters with snakes in their hair who can turn men into to stone with but a glance. Barbara Shelly is cast as the human counter-part , but Prudance Hyman steps in to play the hideous monster. The Reptile (1966) introduces a young lady, Anna (Jacqueline Pearce) Franklyn, suffering from a Malaysian curse that causes her to transform into a snake-woman. Peter Cushing would attempt to create a Bride of Frankenstein of sorts in Frankenstein Created Woman (1967), when he transplants the soul of a wronged killer into the dead body of a scarred but beautiful young woman, Christina, played by Susan Denberg. Alongside Hammer’s output, in Italy, Mario Bava cast Barbara Steele as the witch Princess Asa Vajda in Black Sunday (1960) in a variation of the classic Russian horror story, Nikolai Gogol’s Viy (1865). 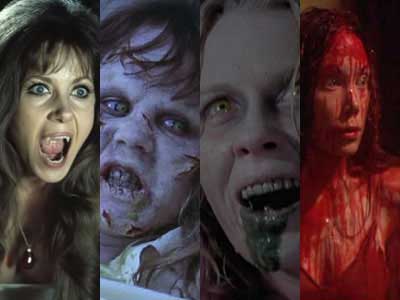 In the Seventies, Hammer produces a string of vampire stories with strong female vampire leads, known as the Karnstein Trilogy loosely based on the J. Sheridan Le Fanu novella Carmilla: Vampire Lovers (1970), Lust for a Vampire (1971) and Twins of Evil (1971). These films make a star out of Ingrid Pitt who also stars in the Hammer film Countess Dracula (1972), based on the story of Countess Bathory who, instead of drinking blood, bathes in the blood of virgins to regain her youth. William Friedkin  casts young Linda Blair in the Exorcist (1973) and creates, with the help of effects artist Dick Smith, the most frightening female monster put to screen in the possessed little girl, Regan MacNeil. The film is a box office smash and spawns a barrage of possessed, head-spinning, bile-spitting monsters. Among these monsters is Jessica (Juliet Mills) Barrett in Ovidio G. Assonitis’ Beyond the Door (1974) and Carol Speed as the title character in Abby (1974). Brian De Palma brings Stephen King’s expansion to the theme, Carrie (1976), to the screen with Sissy Spacek as the title character who has psionic powers. 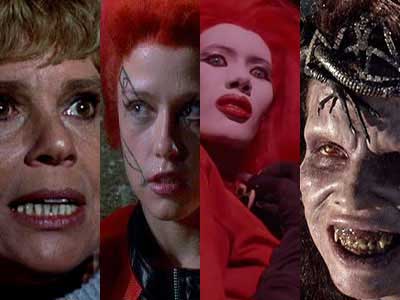 While Friday the 13th series of films is primarily known for the hockey-masked killer Jason Voorhees, in the first feature, Friday the 13th (1980), the killer is revealed to be Jason’s mother, Mrs. Voorhees played by Betsy Palmer. By the mid-Eighties, there had been a number of female zombies, but none are as remarkable as Linnea Quigley’s star-making role of Trash in Return of the Living Dead (1985). Grace Jones vamps it up in the vampire feature Vamp (1986) as Queen Katrina, the leader of a blood-drinking undead cult running a nightclub. Even in the sequel to the box-office hit Alien (1979), Sigourney Weaver is provided a female counterpart in the Aliens (1986) with the shocking reveal of  the Alien Queen. She is not only the queen of her kind, laying eggs and guarding her young, but she is physically much larger and more threatening than the drone aliens seen before her. In Kevin Tenney’s Night of the Demons (1988), Amelia Kinkade stars as Angela who conjures up a vengeful demon imprisoned in the abandoned house in which she and her friends choose to party . The demon possesses her body and the fun begins. 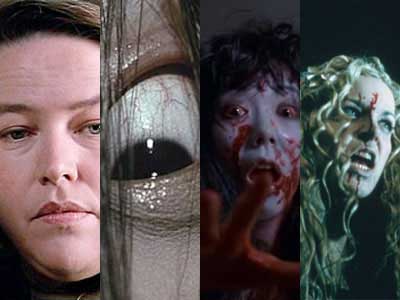 By the end of the nineties and the turn of the century, female monsters are almost common place, mostly in part due to a successful string of Asian horror features known as J-Horror. Hideo Nakata’s The Ring (1998) introduces the dark haired female ghost with Sadako (Inou Rie) Yamamura, a ghost who rises from the grave to take the lives of anyone who sees the video she created upon her death. Takashi Shimizu’s series of films known as Ju-On (remade as The Grudge in the States) began in 2000 and build on the Japanese Onryo (vengeful ghost) legend. In the series, Takako Fuji  stars as Kayako, the ghost of  woman brutally murdered by her husband and responsible for spreading her curse. These two films, and their many sequels and remakes, spawn dozens of similarly themed films with similarly designed ghostly and vengeful women. In the states, another Stephen King adaptation brings the killer Annie (Kathy Bates) Wilkes to the screen terrorizing writer Paul (James Caan) Sheldon in Misery (1990). Horror Rock Icon Rob Zombie casts his wife Sherri Moon Zombie in House of 1,000 Corpses (2003) and Devil’s Rejects (2005). As Baby Firefly, a deranged and ruthless killer, she often outshines her male counterparts.