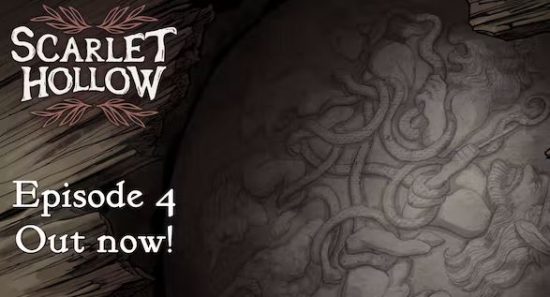 It’s been a long time coming, but Episode 4 is finally here. Enjoy! :)

If you haven’t picked up the game yet, it’s currently 20% off Steam, GOG, and itch!

To celebrate the launch, we’ve also extended the Wayne plush crowdfunding campaign, so check it out if that sort of thing interests you! Our composer also decided to make the entire Episode 4 soundtrack pay what you want on his Bandcamp for the next week, so pick it up now while you still can: brandonboone.bandcamp.com/album/scarlet-hollow-episode-4-official-soundtrack

There have been a few changes to earlier episodes over the course of Episode 4’s development, with the most notable one being an overhaul of the Mystical trait. Both Wayne and the carvings have their own themes as of Episode 4, and we’ve also replaced the Original Sin track in earlier episodes with these new recordings.

If you want to join in the community discussion, please check out our Discord (discord.gg/blacktabbygames) and the Scarlet Hollow subreddit (www.reddit.com/r/ScarletHollow/).

The Discord is also the best place to report bugs! Alpha testers did a great job with the new episode, though, so hopefully there won’t be too many to find! If you run into weird issues early on, try verifying the integrity of your installation through Steam — I know the first round of patching was a little funky for some of our testers, but that should clear most things up!

Aside from bug fixes and a celebratory stream (date TBD), we’ll be taking a month or so off some time off to recover from this deadline. And then it’s going to be straight into work on Episode 5 and Slay the Princess.

Thanks so much for your support, and welcome home,
~Abby and Tony

PS: As a note, Episode 4 is an escalation over prior chapters, so if you happen to need content warnings, we’ve updated our website to have an episode-by-episode breakdown: www.blacktabbygames.com/content-warnings-sh