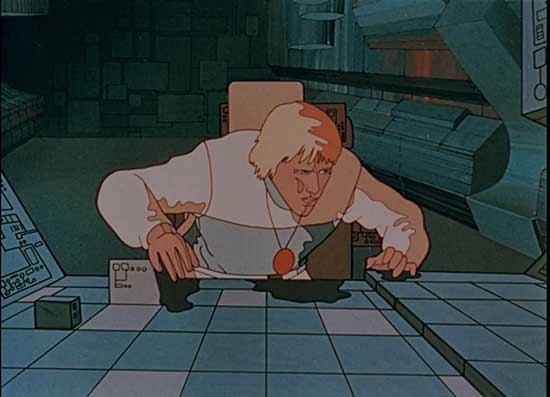 Deaf Crocodile Films announced today that it has licensed North American home video rights to the rarely-seen 1987 Romanian animated sci-fi film THE SON OF THE STARS (FIUL STELELOR / ULTIMA MISIUNE). Never before officially released in the U.S., the film, described as a wild mid-eighties mash-up of The Empire Strikes Back, Alien, and Tarzan, was directed by the same creative team behind DELTA SPACE MISSION (previously released by Deaf Crocodile), Romanian animators Călin Cazan and Mircea Toia. Working with the Romanian National Film Archive and Cinematheque and the Romanian Film Centre, Deaf Crocodile has created a new 4K restoration from the original 35mm camera negative and sound elements, overseen by Co-Founder and in-house restoration expert Craig Rogers.

“The discussion about doing another film started at the end of the production of the DELTA SPACE MISSION movie,” says Co-Director Călin Cazan from his home in Bucharest, Romania. “Any director, even in short films, when they get into post-production (editing, mixing), starts thinking about the next project. We had a team behind us that depended on us.” Asked about his collaborator Mircea Toia, who died in the early 1990s, Cazan recalls: “Mircea was an inventor. In the script, I was pretty much on the same level. But in mastering the image, the frame, he was better. And as a friend, he was very patient with me — he was about fifteen years older and I was at the beginning of my career.”

“We had such a wonderful time working with Călin on the release of DELTA SPACE MISSION. And then we discovered that he and Mircea Toia had directed another feature right after, just as surreal and psychedelic — and if anything, even more criminally unknown here in the U.S.,” says Deaf Crocodile Co-Founder and Head of Acquisitions & Distribution, Dennis Bartok. “Their ingenuity, working behind the Iron Curtain in the mid-1980s, incorporating elements of Western sci-fi and Japanese anime with Eastern European music and mythology and even politics, was just astonishing. I just wish they’d been able to make a dozen more features — but we’re incredibly proud that we’ve been able to restore their two animated features together, THE SON OF THE STARS and DELTA SPACE MISSION.”

Deaf Crocodile will release THE SON OF THE STARS in a special edition Blu-ray in early 2023.

THE SON OF THE STARS (FIUL STELELOR / ULTIMA MISIUNE), 1987, Animafilm, 80 min. From Romanian animators Mircea Toia and Călin Cazan, the team behind DELTA SPACE MISSION, THE SON OF THE STARS is an even more wildly ambitious and surreal outer space adventure, a mid-1980s mash-up of THE EMPIRE STRIKES BACK, ALIEN and Edgar Rice Burroughs’s Tarzan.

In the year 6470, a husband and wife team of explorers receive a mysterious distress signal from a female astronaut who disappeared decades earlier. They leave their son, Dan, on board their ship while they go searching for the missing woman — but fate intervenes, crash-landing the ship on a jungle-like planet populated by bulbous, telekinetic aliens and eerie stone gardens of frozen space creatures. Like Cazan’s and Toia’s marvellous DELTA SPACE MISSION, THE SON OF THE STARS gets more freakadelic as Dan grows up ala Luke Skywalker, encountering giant disembodied eyeballs, a world of massive decaying Cubist structures, floating purple tentacles, and alien-headed cosmic flowers, and even a sword-wielding medieval Space Knight in armor. His visions of his lost parents and the missing cosmonaut are especially psychedelic, a phantasmagoric blend of Hanna-Barbera and Tarkovsky’s SOLARIS.

With a fabulous score by synth-rock pioneer Ștefan Elefteriu, THE SON OF THE STARS is another long-lost gem of Romanian animation, newly scanned in 4K by the Romanian Film Archive and the Romanian Film Centre, with digital restoration by Craig Rogers of Deaf Crocodile. In Romanian with English subtitles.