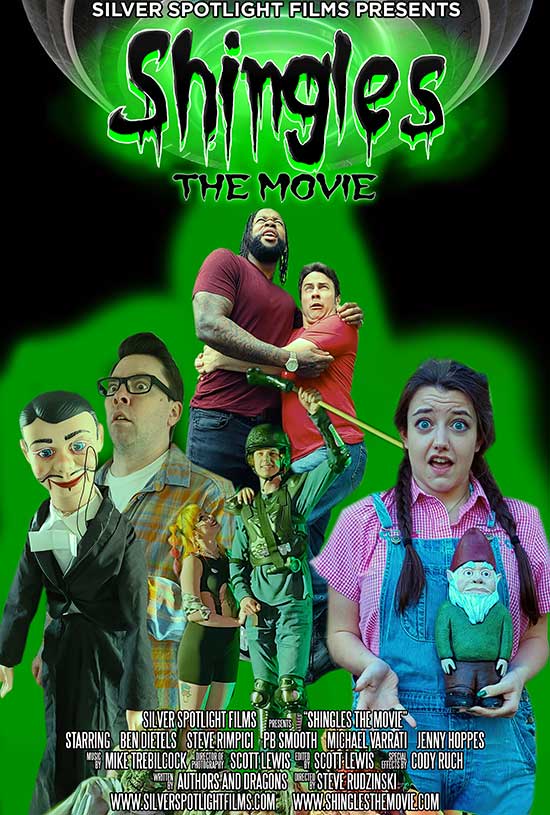 Shingles the Movie is a hilarious, weird, and bloody addition to the horror anthology genre that I believe fans of the book series and new audiences that never heard of Shingles will appreciate and have a blast with. As a lifelong fan of horror, I have seen plenty of Horror Anthology films. Over the years one of my biggest takeaways was how there were many that used a different creator on each short story, leading to interesting tonal or style differences. On one hand this can be great, as it exposes the audience to different takes on the genre in one film.

On the other hand this can make it so folks always have one single story in an anthology they don’t like at all (or even cases where one story is all they enjoy). This feeling always gave me the interest in making an anthology with only me as the director: multiple stories with one main creator that would, for better or for worse, make the whole film feel more cohesive and connected. This was something I never got around to making. Until the day I was found by the Authors & Dragons. They were a group of authors who wrote multiple books, had a relatively large fanbase around the world, and were big fans of CarousHELL. They approached me to adapt their book series Shingles into a feature film as a Producer and Director.

They already adapted five books from their long running series into a screenplay and wanted me to read it to both gauge the budget and just if I’d be interested. I never felt the need to mention I always wanted to make an anthology. We went back and forth a bit, as they were used to only writing for the page and I had to explain some stuff in the script was not needed or far too expensive for a single gag, but we came to a wonderful compromise on a final script and I gladly accepted the job of turning THEIR babies into something people would watch for years. I immediately brought on Aleen Isley as my Line Producer and Scott Lewis as cinematographer/editor to complete the Trinity, knowing how well we make fun films together after nearly a decade of being a team.

We talked about ideas and how to best work this creatively. Scott introduced handling the different ways he would handle the camera between each story, such as explicitly sticking with a tripod for most of one story while wanting to be all handheld for another story.

I introduced the simple idea of each story having its own specific color lighting. Aleen solved many of the questions we had in the story of where and how we could shoot certain sequences, being completely invaluable in processes of both pre-production and production. As we approach the final product, I have to say I’m really happy with the sort of Horror Anthology we delivered.

I think the Authors of the books will love how their vision has been adapted to screen, I think fans of the books will enjoy seeing how the films both differ from and embrace the book stories, and I think new audiences will be able to love what they’ll think is a brand new & original wacky comedy with a bunch of cool practical effects. It scratches a sort of nostalgic itch with what feels like the soul of 90s horror books while also feeling like a fresh new take on horror anthologies. At the end of the day I make movies because I hope they make people smile and feel good