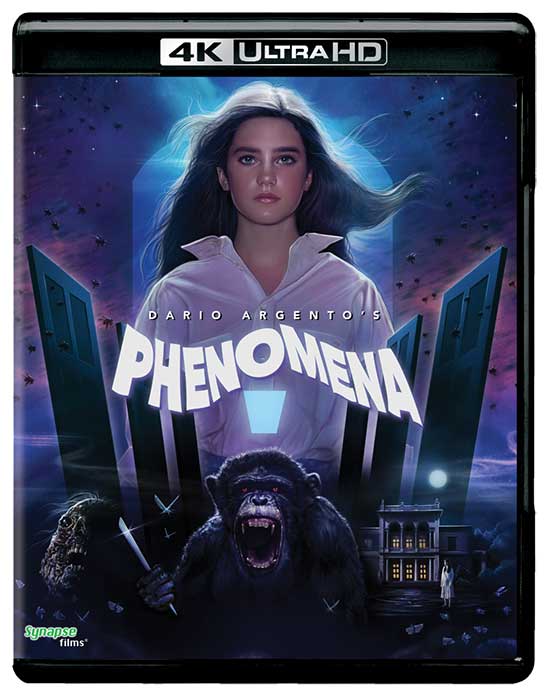 “[A] great package, and this gorgeous 4K video presentation is unquestionably the definitive home video version of Phenomena.” – The Digital Bits

“Synapse’s new 4K UHD release of Phenomena is, like their UHD edition of Suspiria, stunning to behold.” – Under the Radar

From Italian master of the macabre Dario Argento (Suspiria, Tenebrae), comes Phenomena – one of his most beautifully designed horror films – now remastered in 4K Ultra HD and Dolby Vision in a standard two-disc set.

The young Jennifer Corvino, played by Oscar-winning actress Jennifer Connelly (Labyrinth, Top Gun: Maverick), is sent to a private Swiss academy for girls where a vicious killer is on the loose. Jennifer has the unique ability to telepathically communicate with insects and an entomologist, Dr. John McGregor (Donald Pleasence, Halloween, Escape from New York), enlists her help in locating the murderer. As the mystery unfolds, they find themselves in a bizarre murder plot with maggots, telepathic insects and a razor-wielding chimpanzee! Can Jennifer uncover the killer’s identity before becoming a victim herself?

– Of Flies and Maggots, a feature-length 2017 documentary produced by Arrow Films, including interviews with co-writer/producer/director Dario Argento, actors Fiore Argento, Davide Marotta, Daria Nicolodi and others