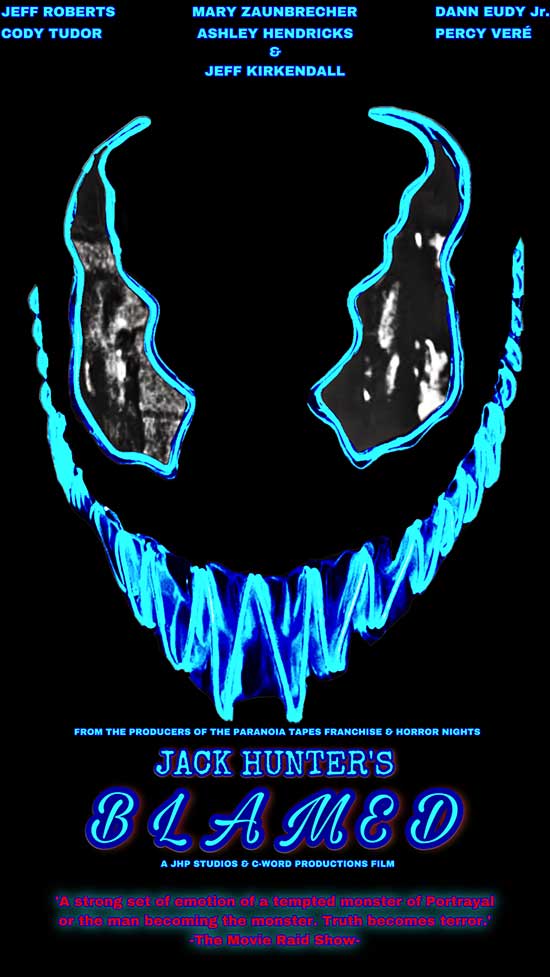 This film was written, directed, scored & edited by Jack Hunter of JHP Studios.

In Avasian Parish, Louisiana, all things are not well. Several local children have gone missing and have been found molested and murdered. For local patron, Justí Bussèllî, his life is being turned upside down as he is being accused of these horrific acts of torture and violence.

As he is found ‘NOT GUILTY’ by a juror of his peers, the locals in the area are still not convinced that he is innocent. Justî and his Lawyer are soon kidnapped and tortured by someone dressed in a horrific mask and costume. Will the verdict that was cast by the courts be the final verdict or will DAMAGED get a different story all while being streamed & revealed LIVE on the dark web. – JHP Studios

Blamed takes the found footage genre in a direction that has not been attempted since the film ‘MEGAN IS MISSING’. This film deals with the reality of what is actually going on in the world we live in today. The idea of suspending disbelief is not a hard feat for this film. Everything that you see in this film was based on actual events that can be googled and researched. In fact, after the film, Jack Hunter reveals the shocking and heartbreaking truth about why he made this film. In this screener version of the film, you will get a quick insight into how this film came to be. This film is not for the faint of heart, and we say that, not to ‘amp’ up the film, but the content you are about to see is very disturbing on every level. Jack Hunter would like to assure you that no child was hurt or under any strain during the production of this film. What you are seeing was done professionally and in no way, shape or form was any child put under any stress, harm, or put in danger during the production of this film. All stunts and effects were fully supervised by the JHP Studios Production Team.