Home | News | THE SCORPION WITH TWO TAILS – Available on Blu-ray and DVD for the first time in North America!

THE SCORPION WITH TWO TAILS – Available on Blu-ray and DVD for the first time in North America! 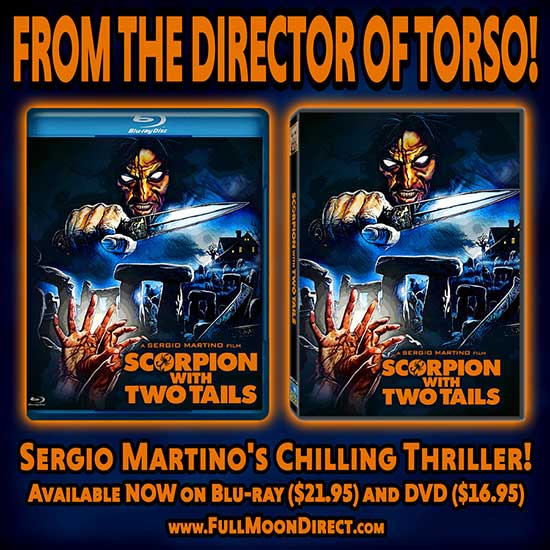 Screaming onto Blu-ray and DVD for the first time in North America, maverick Italian director Sergio (TORSO) Martino’s long unseen 1982 horror thriller THE SCORPION WITH TWO TAILS (aka MURDER IN THE ETRUSCAN CEMETERY) is NOW ON SALE from Full Moon and ready to be added to your collection!

Originally shot as an 8-part horror miniseries for Italian television, THE SCORPION WITH TWO TAILS was cut down to feature length and released theatrically in various European markets. Long unreleased, Italy’s Mya Video put the film out on DVD several years ago and that release has since fallen out of print.

The film tells the tale of a young woman who is having gruesome dreams of ancient sacrificial rites. When her husband is murdered in the same ritualistic way, the girl begins to suspect that someone or something is targeting her, leading the girl deep into a nightmarish mystery involving death, smuggling and reincarnation.

Featuring a score by the great Fabio Frizzi (in part using cues from Lucio Fulci’s CITY OF THE LIVING DEAD), the stylish and bizarre chiller stars the iconic John Saxon ( A NIGHTMARE ON ELM STREET) and is filmed on location in eerie Italian catacombs, caves and cemeteries.

Also! Be sure to watch the latest installment in Charlie Band’s FULL MOON UNIVERSE state of the union address!

And, as we do every week, we are giving away FREE STUFF! Tune in and try your luck!