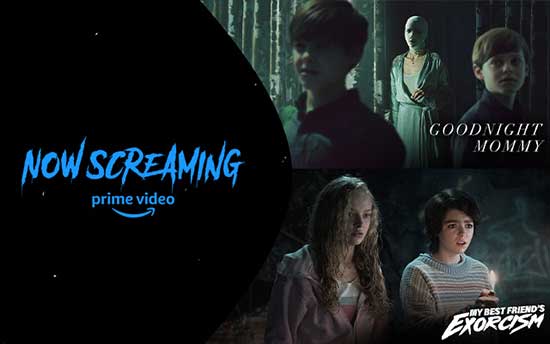 From ghosts to ghouls and monsters that drool, Prime Video has all the streams that scream.

Have an eerie feeling? Grab a seat on the edge of the couch with Amazon Originals.
Run Sweetheart Run follows the journey of a single mom being hunted on her way home from a seemingly normal client dinner. In the new series The Devil’s Hour, a woman wakes up every night by terrifying visions at the devil’s hour (3:33 AM).

Want something on the lighter side? Laugh along to Blumhouse’s Bingo Hell, where a feisty senior citizen fights to save the local bingo hall from a murderous force. Stream dark comedy, My Best Friend’s Exorcism – featuring teen best friends Abby and Gretchen as they grapple with an otherworldly demon controlling Gretchen’s body.

Turn up the heat with the new Stephen King movie Firestarter, which follows a young girl as she navigates her mysterious new powers: an ability to set things on fire with her mind. Do the “Time Warp” with Riff Raff, Magenta, and Dr. Frank-N-Furter from comedy-horror musical The Rocky Horror Picture Show. Laugh along with The Addams Family 1 and The Addams Family 2 for a double feature of the hit movies. Check out popular cult drama American Horror Story S10, which is sure to give all the thrills and chills.

On Amazon Freevee, tune in for more frightful delights, including The Invisible Man starring Emmy® winner Elisabeth Moss as she plays a woman being hunted by the (unseen) presence of her abusive ex-boyfriend. Pick between the contemporary re-imagining of the 1988 horror classic, Child’s Play, and kid-friendly animated film
Monster House.

Can’t get enough? Now Screaming is the ultimate destination for horror fans to find Prime Video’s new releases and extensive creepy catalog, community integrations, curated collections, bespoke events and partnerships, and the history of the genre across gore, psychological thrillers and classics. Join us @NowScreamingPV on TikTok, Twitter, and Instagram.

Explore access to all the magic and mayhem in one place this “spooky” season.