Madelyne Pryor. Ben Reilly. As clones of two of Marvel’s greatest super heroes, they’ve gotten the short end of the stick time and time again. This December, they’ll join forces to take their ultimate revenge in DARK WEB, an epic new Marvel Comics crossover involving Spider-Man, the X-Men, Venom, Ms. Marvel, and more! The saga will fan the embers of the iconic INFERNO crossover and pack an emotional punch that pays off decades of Marvel Comics storytelling. Fans have already gotten a sneak peek at what’s to come and now, it’s time to see just how things will continue to spiral downward for your favorite heroes come January! 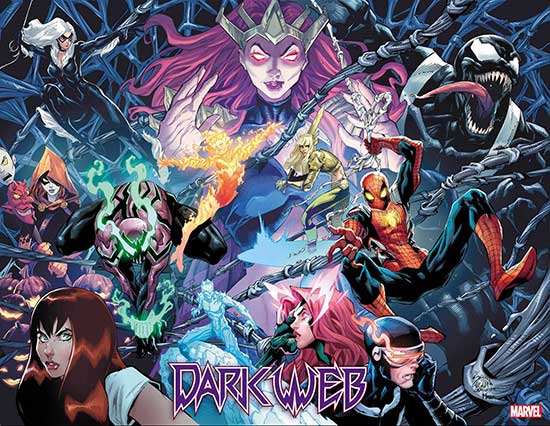 DARK WEB will unfold in the pages of Zeb Wells’ run on Amazing Spider-Man where he’ll be joined by superstar artist Ed McGuinness for the duration of the story arc. In AMAZING SPIDER-MAN #17 and #18, Peter Parker is reeling from the opening battles of DARK WEB and now finds himself in Limbo. Peter not only has to find his way back home, but he has to do it in a truly hellish fashion. And who is shadowing him? As if the normal run-of-the-mill demons of Limbo weren’t enough… Spider-Man finds himself facing a small army of demonized versions of his rogues’ gallery! Can he make it home to stop Chasm and the Goblin Queen?!

Mary Jane Watson and Felicia Hardy are trapped in Limbo and at the mercy of BELASCO THE SWORDSMAN in Jed MacKay and Vincenzo Carratu’s MARY JANE & BLACK CAT #3. As if that wasn’t bad enough, they’re also keeping secrets from one another! Somehow, MJ’s got powers and there’s a new (old) man in Felicia’s life – and if they don’t come clean with one another, they could be stuck in Limbo FOREVER!

Dark Web will also leave a profound impact on Al Ewing, Ram V., and Bryan Hitch’s hit run on Venom. In VENOM #14, Dylan Brock finds himself renewed and reinvigorated by his descent into the symbiote hive but Bedlam has come calling again – looking to finish what it started by killing Dylan and Venom once and for all. Luckily, an old friend is around to lend a crimson-clad hand… (And it isn’t Spider-Man!)

Caught in the explosive events unfolding across New York – including a face-to-face confrontation with Chasm himself – Kamala Khan finds herself teleported to Limbo, the domain of the Goblin Queen Madelyne Pryor in DARK WEB: MS. MARVEL #2 by Sabir Pirzada and Francesco Mortarino! As the city descends into chaos that threatens everything and everyone Kamala holds dear, she’s left with no choice but to call on Miles Morales for a helping hand!

And Madelyne Pryor’s complex place within the Summers family results in a dramatic confrontation that will go down in X-Men history in Gerry Duggan and Rod Reis’ DARK WEB: X-MEN #3! When Jean Grey returned from the dead, Scott Summers left his wife and child to be with her. The fact that she was revealed to be a clone of Jean didn’t make her feel any better. Maybe the cold sting of revenge can?

Check out the covers and story info now and stay tuned this Saturday for even more DARK WEB announcements, including an exciting new trailer, at the Marvel Comics: Next Big Thing at New York Comic Con! For more information, visit Marvel.com.