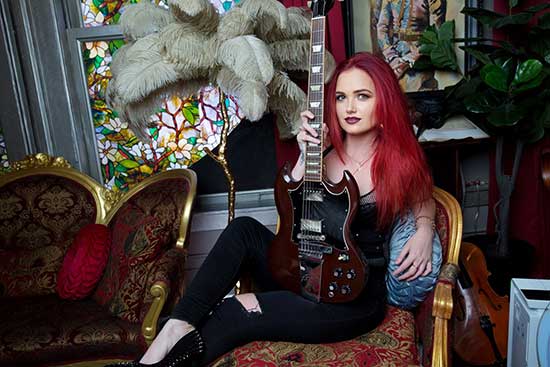 Today Evol Walks debuts their commanding hard rock track “Back Where You Belong.” Queen of rock ‘n’ roll Leah Martin-Brown commands listeners with her full-throttle vocals and ruthless lyrics that wholeheartedly express the anguish and fervor that follows a breakup. The track’s ferocious, larger-than-life sound comes as no surprise since it was produced by Brian Howes (Airbourne, Nickelback, Halestorm, Simple Plan, Daughtry). It’s the hard rock breakup anthem for headbangers around the world to relish.

“Back Where You Belong is the breakup song written in hell for the person struggling with their inner demons.” – Leah Martin-Brown, Vocalist of Evol Walks

Evol Walks has been unapologetically kicking down stage doors of iconic venues worldwide since 2014. Their ferocious approach to hard rock is fueled by their “take no prisoners” attitude, classically inspired yet modern guitar riffs, and a lead vocalist who oozes an unrivaled passion, tenacity, and ferocity for all things rock and roll.

In the midst of a global pandemic, the band’s songwriter and vocalist Leah Martin-Brown was whisked away to Stockholm, Sweden where they’ve continued releasing high-octane singles as Evol Walks prepared for a full-length album release. Following the path paved by rock goddesses like Joan Jett, Lzzy Hale, and Amy Lee – Evol Walks possesses the merciless passion, musical craftsmanship, and fiery spirit (and hair) to continue pushing the way forward for the next predecessors of female powerhouses.

Stream “Back Where You Belong” HERE