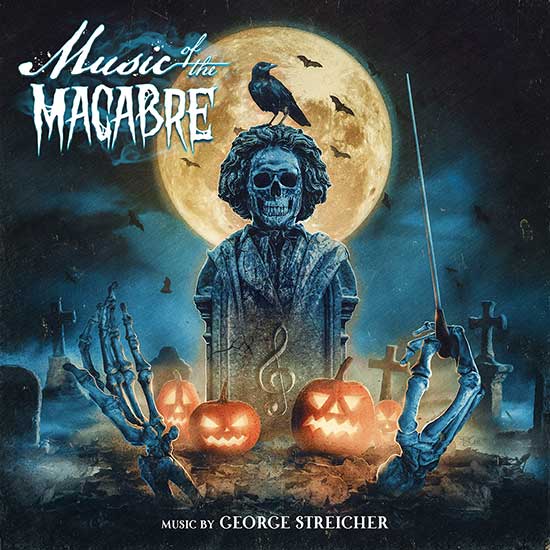 The album is filled with the composer’s nostalgia for childhood celebrations of Halloween and the fall season.

The album aims to capture the spirit of Halloween. For Streicher, the holiday, “meant hay rides, haunted houses, renting scary movies, and trick-or-treating through our idyllic Illinois suburb.” These memories and nostalgia for the season inspired some tracks on the album and others pay homage to music you would hear in a haunted house, movies, or retro Halloween CD or cassette. Streicher’s hometown even inspired some of the album’s artwork.

1. Opening: Among the Headstones

2. Scherzo for a Harvest Moon

7. The Ghost of John

Streicher could even envision these tracks becoming the score to a horror film in the future. “A lot of these tracks drew inspiration from classical, folk and old-fashioned horror film scores. I didn’t imagine I was scoring a film, necessarily, but I tried to capture a vibe of macabre fun and a sort of nostalgia for the season. There are many little musical easter eggs that serve as the backbone of several pieces on the album. For example, I took the sound effect from an old shaking ghost decoration I had as a kid and developed that into an entire piece.”

Streicher recently finished working on Tubi’s “Corrective Measures,” which is a sci-fi action film starring Bruce Willis and Michael Rooker. He has previously composed various original scores for features like “Heroes of the Golden Masks,” starring Patton Oswalt, “Go Fish,” and “Howard Lovecraft and the Undersea Kingdom.” He has also worked on several television projects including Comedy Bang Bang’s “Total Badass Wrestling” and Nickelodeon’s “The Smurfs.”