Leather Announces New Studio Album “We Are The Chosen” for Release November 25th, 2022 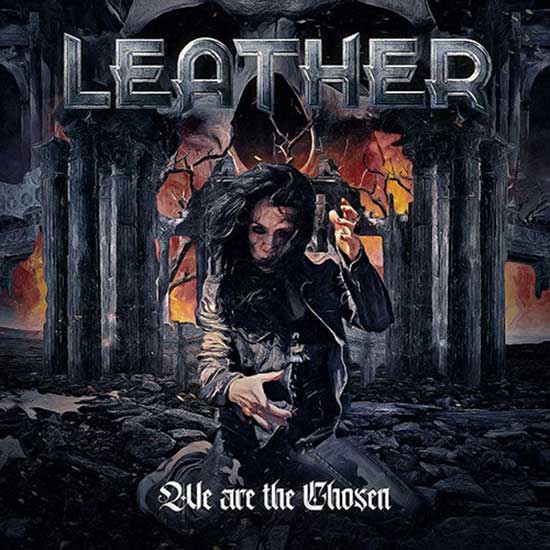 Leather’s New Studio Album “We Are the Chosen”

Leather Leone has a mission, and not just recently, but since the beginning of her life as an artist. As a thoroughbred musician, an exceptional metal vocalist, and above all as an unconditionally positive person, her message has always been: “Never give up and stay the way you are!”

You don’t have to look far to find this encouraging credo on her new solo album ‘We Are the Chosen’: It features immediately on the opening track “We Take Back Control”, and it would be difficult to express her self-confidence and zest for action more unequivocally. The song sets the direction for the whole album, for Leather’s ambitions, and for her future as a committed musician. Her positive lyrics run like a leitmotif through the album’s ten songs and create an atmospherically dense arch up to its programmatic finale “The Glory in the End”.

The album has been scheduled for release on November 25, 2022 on Steamhammer/SPV and will be available for digital download as well as on CD and vinyl LP. The lead single will be out on September 23, followed by a second single on November 4.

Leather Leone undeniably counts among the most charismatic metal vocalists of the past four decades. She already caused a sensation in the 1980s as frontwoman of Chastain, the band of guitar icon David T. Chastain. Together with him, Leone has produced a series of successful albums up to the present day, some of them for legendary US talent scout Mike Varney’s imprint, Shrapnel Records. She has also released successful recordings with Malibu Barbi, Sledge/Leather, among others, and as a solo artist.

“We Are The Chosen” features her first solo songs since “Leather II”” (2018), highlighting the amazing energy which has allowed her to break free from the oppressive situation of the past two years. Leone remembers: “Things had been going really well for me just before the Lockdown started, but with the arrival of Covid, all my touring plans had to be shelved and things were threatening to go down the drain. But my friend and guitarist Vinnie Tex was totally right in saying: ‘Now more than ever! We’ll do everything ourselves!’ The very first number we composed for the new record was ‘We Take Back Control’, which pointed the direction for the rest of the album.”

A direction which is also manifest on the other songs, such as the characteristic “Who Rules the World”, which is, as she explains “a typical example of my style, a kind of retrospective of my entire musical life”. In addition, there are a number of surprises on the new album: “Off With Your Head” has the American chanteuse embark to new pastures; Leone explains: “This song is one of my absolute favourites.” “Hallowed Ground”, which she has dedicated to her great idol Ronnie James Dio, also deserves to be mentioned. “I met Ronnie lots of times and had wonderful discussions with him. He knew that I first got into metal thanks to his music and that I owe him lots.”

“We Are the Chosen” was recorded at the Hertz Studios (Behemoth, Vader, Hate among others) in Białystok, Poland, with Leather Leone and Vinnie Tex in charge of songwriting and production. Woitek and Slawek Wieslawski mixed and mastered the material, and Marcelo Vasco (Slayer, Kreator, Testament) contributed the cover artwork.

Leather and Vinnie Tex have invested vitality and passion in every last detail of their new metal anthems, so it comes as no surprise that Leone sums up her latest offering as follows: “To me, “We Are the Chosen” is a labour of love and I’m incredibly proud of it!”

The new album “We Are The Chosen” will be released on November 25, 2022 worldwide through SPV/Steamhammer as CD DigiPak, LP version, CD/LP bundle with shirt (only at the Steamhammer shop), download and stream: Leather.lnk.to/WeAreTheChosen