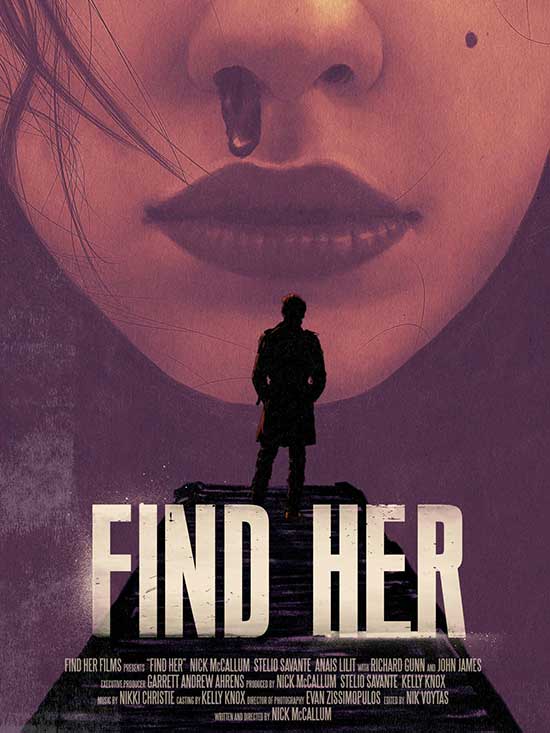 Los Angeles, CA – Kaczmarek Digital Media Group, Inc. (KDMG, Inc.) has announced the VOD and digital release of the noir thriller “Find Her” on October 1. The DVD release will follow in fall of 2022. Watch a clip from ‘’Find Her’’ directed by Nick McCallum.

“Find Her” is both written and directed by actor/filmmaker Nick McCallum; and produced by McCallum, Stelio Savante, and Kelly Knox; and executive produced by G. Andrew Ahrens.

Best described as “Brick” meets “Gone Baby Gone”, “Find Her” was filmed in Louisiana and Florida. When an ex-cop arrives in a small town searching for answers to a murdered ranch owner and his missing daughter, it slowly becomes clear he has his own personal agenda to finding the truth.

“Finding a good noir film is rare, and what is extremely rare, is finding one that delivers the intrigue, mystery, production esthetic and classic acting we’ve grown to expect, said Kyle Kaczmarek, CEO and managing director of KDMG, Inc. “This film delivers and is a perfect fit for KDMG’s family of titles. We are excited about its release and bringing it to audiences.”

“Nick’s film is a classic neo-noir that we’re very proud of,” stated filmmaker Stelio Savante. “We’re excited that KDMG is bringing ‘Find Her’ to fans of thrillers and to film audiences all over the world.”

“Find Her” will be available on most major streaming and cable platforms across the U.S. followed by major on-line DVD retailers. Watch the trailer here.

KDMG, Inc. was founded in 2012 to provide a non-traditional, outside the box, hands-on digital approach to entertainment content providers. KDMG is passionate about distributing independent and international films to the top digital streaming platforms. Their most recent releases include the titles Echoes of The Past (Max Von Sydow), On the Other Foot (Tim Faraday), and A Living Doc (Stefan Ebel). For more information, please visit www.kaczmarekdigital.com