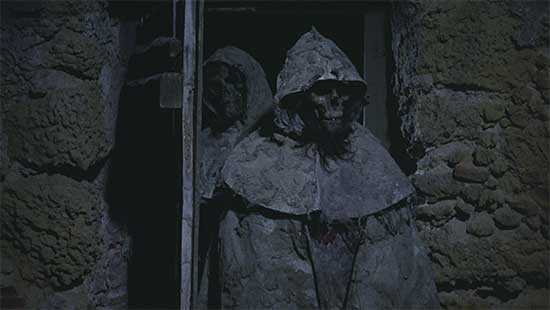 Tombs of the Blind Dead (1972) stands alongside Night of Walpurgis (1970) and The Living Dead at Manchester Morgue (1974) as one of Spain’s most iconic horror films. The depiction of creepy, sightless walking corpses who must find their victims through sound evokes the excellent A Quiet Place (2018), another film relying on visionless creatures to build tension.

The optic impairments suffered by the reanimated Templar (?) knights add a uniqueness that sets them apart from traditional zombies. Still, the knights share a trait common among many back-from-the-dead beings – The Blind Dead are also the “slow dead” whose movement is incredibly deliberate and plodding.

Rather than detract from the fear monsters should inspire in a horror movie, the shambling Blind Dead’s slow pace helps make them scarier. High tension lives.

Numerous jokes (all tired) target old-time mummy movies, mocking how the slow-moving Kharis runs after (walks after, really) a victim. Universal’s creative team figured the only logical way for the bandaged one to get his hands around the victim’s throat involved his quarry taking a wrong turn down a dead-end alley. Mistakes happen when fear leads to an unfocused mind, and a monster’s perceived limitations disappear.

The Blind Dead move as equally slow as Kharis because that’s how mummies function. And yes, the Blind Dead – per director Amando de Ossorio – are mummies, not zombies, as some reference sources note. Perhaps calling them zombie/vampire hybrids would be more accurate, but you can’t argue with the creator. Maybe the safest thing to call them is the living dead.

Call them living, call them dead, but don’t call them expedient. 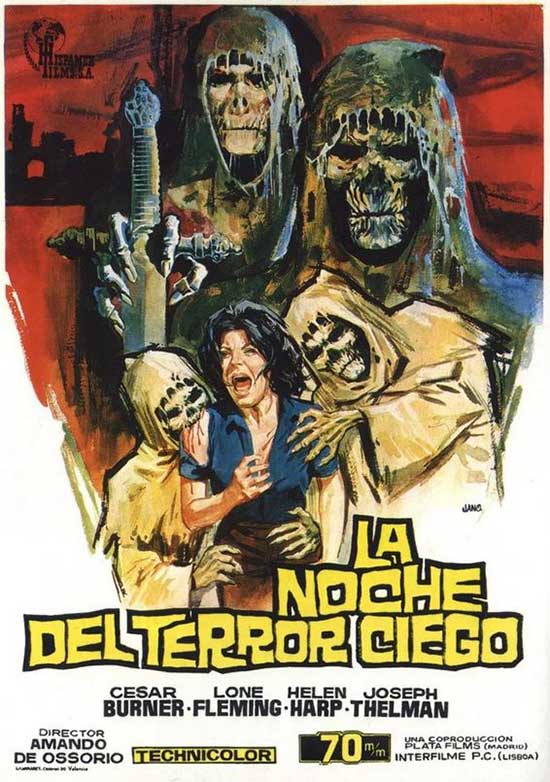 Even so, mummies, zombies, and the Blind Dead don’t deserve snide jokes or ridicule for their slow movement. These weird creatures can hardly move as their joints decayed along with their flesh, leaving them far less spry than their human days during medieval times. Yes, these walking dead creatures saunter slowly, but they never lose their menace, which makes them frightening.

They have nothing but awful intentions for victims, and appeals for mercy waste breaths. The slow walk only delays the inevitable – their prey’s demise. The slow walk to reach their victims further builds dread, adding to the surrealist fear audiences may feel.

Not every resurrected corpse has the same approach.

Return of the Living Dead (1985) and 28 Days Later (2002) attempted to change the “zombie walk” to something more modern – the creatures moved a lot faster, making it more challenging for human prey to escape. The presence of faster-moving monsters has a counter effect, though – the films start to embody an action movie pace. Action movie tension and horror movie tension are usually not the same. A slower pace has a nihilistic factor – fate will come, and there’s no way out, no matter how much time passes.

Faster monsters mean a quicker pace, which could undermine the ability to build tension, depending on the overall structure and execution. Predator (1987) contains much tension to go along with its action film-paced horror. The same applies to Dawn of the Dead (1979) and other action-adventure-horror genre-crossers. Different films build tension in their own manner, and Tombs of the Blind Dead benefits from a slower burning tension. 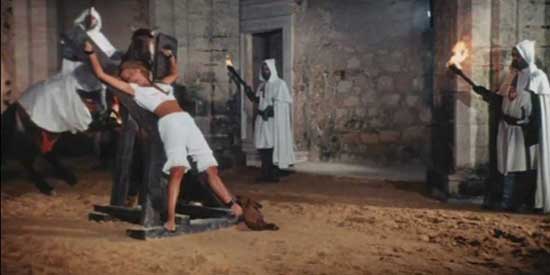 The slow walk throughout a night of blind terror plays out during a pivotal plot point:

Love triangles lead to cinematic melodrama, even in horror films. Tension builds between Roger, Betty, and Virginia when the three take a train ride through the rural, remote region near the Spain-Portugal border. Virginia decides to jump off the train and take her chances wandering the countryside. The abandoned town of Berzano looks like an appealing place to camp for the night…until Virginia realizes she’s not in a romance but a horror film where the Blind Dead walk.

The sequences where the Blind Dead rise from their graves to stalk the trespasser, Virginia, slowly build and build until the inevitable arrives: the walking corpses put an end to her life.

Slowly they walk. And not before slowly rising from their tombs.

Poor Virginia has no idea that she wandered out of “traditional reality” and into a town where the living dead reside. The young woman takes her adventure in stride, finding an abandoned structure with a fireplace. She has a roaring fire that gives enough light to read a book while lounging in a sleeping bag, and the transistor radio picks up tonight’s evening of dance music from wherever the signal emanates. 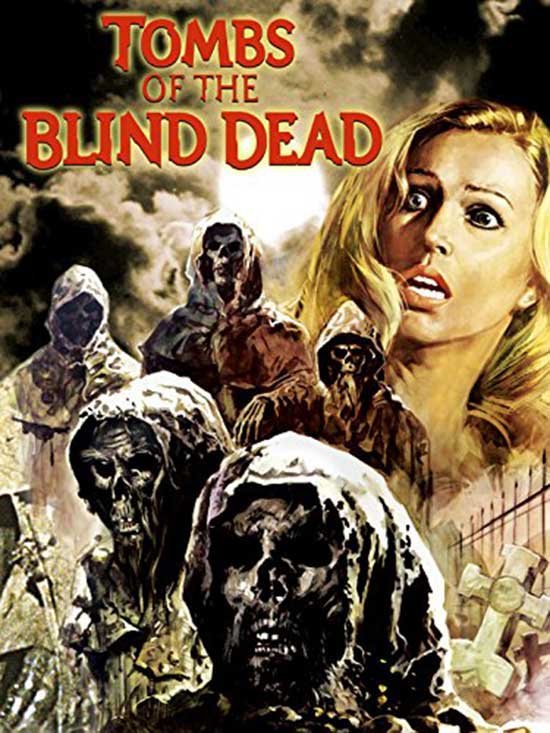 Shame she never knew about the crypts and tombs housing the restless dead not too far away. The Blind Dead can’t see but have sharp, heightened hearing. A crackling fire draws attention, and so does upbeat dance music.

A series of shots follow, cinematic images capturing the dark and desolate nearby graveyard. One shot lingers longer than expected on a tombstone cross, an ironic image that fits the ironic nature of the knights: Christian soldiers marching onward in the service of black magic.

Slowly the cross tombstones rock back and forth, the religious imagery upended as the dead rise, clawing from under their earthen graves. The camera pans slowly and ominously, capturing the scenery before the Blind Dead’s impending arrival.

Director de Ossorio exploits the scene for menace, allowing only the sounds of the dead struggling their way out of their graves to resonate in the still evening. Lessor works would rush the arrival, but de Ossorio slows the pace to a near stop. Images seem like still photos at some points, capturing brief moments in time and dread.

And then a dead creature’s hand comes out from under a ground-level tomb. The Blind Dead rise at their preferred pace – slowly, menacingly, and despairingly.

Virginia has time to escape but doesn’t know what is coming for her. Cross-cutting between her blissful ignorance and the Blind Dead’s rise contributes to frightfulness, an element necessary for horror films to deliver the preferred emotional response. 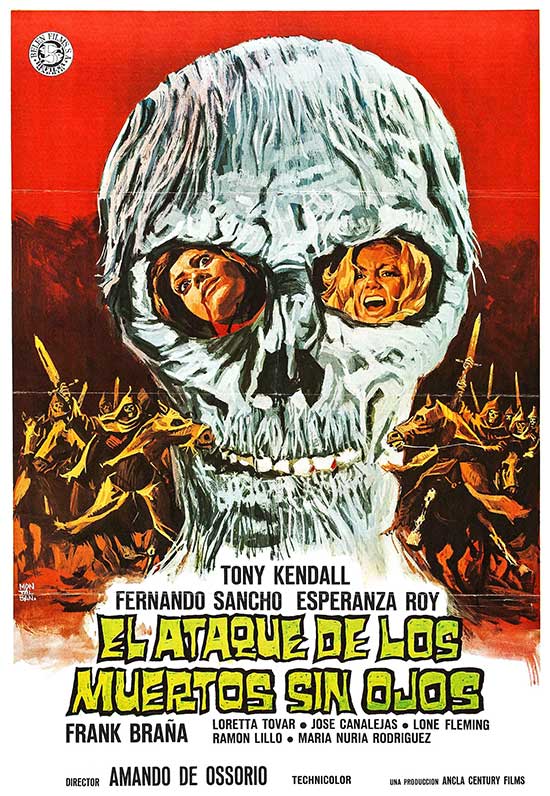 The Blind Dead realize their rotted-corpse physicality makes their movements lethargic, so they know not to shamble the entire path to their intended victims. They travel on horseback, adding urgency and expanding the creep factor of their stalking.

The horseback sequences mimic the inverse of the heroes riding to save the day in a western. When the Blind Dead get into the saddle, they’re riding to commit acts of sadistic cruelty. Traveling by horseback hints they’re in a hurry to get to their destination, as the lumbering dead have no intentions of letting any potential sacrificial victims get away.

De Ossorio filmed the horseback riding scenes in slow motion, not letting the audiences see how fast the Blind Dead reach their prey. The approach helps build further anticipatory worries about what’s to come. We’ve seen what the Blind Dead do when they corner a human: slaughter victims and drink their blood. Thoughts about reasoning with the Blind Dead border on the absurd, and appeals based on sympathy would be even more ridiculous.

And not because they’re mindless. Worse. The Blind Dead understand every word.

The vampire-mummies’ slow movements – on foot and horseback – boost anxious dread while obfuscating the creatures’ most horrifying trait: they think. That’s another element adding to the tension. The Blind Dead possess something the typical zombie or mummy lacks – a cognitive mind, albeit one inside a damaged brain.

A Sharp and Rotted Mind

Roger and Betty return to where Virginia departed the train and eventually meet the Blind Dead and their fate. What a deliberate fate it is. Horseback riding and sword-wielding indicate the evil and functioning minds of the Blind Dead contribute to their oft-repeated success with living prey. Should these results surprise anyone? The Blind Dead had centuries to practice their stalking to keep twisted minds sharp.

The earlier human version of the Blind Dead, the heretical knights, lost their lives at the hangman’s nose and their eyes when crows pecked them away as they hung. Their crimes involved practicing black magic and ritual sacrifice. They were blood-drinkers long before their reanimation, suggesting they don’t drink blood to survive but to gain powers through dark magic rituals. Their plans worked, and the “Knights from the East” cheated death and the hangman’s noose.

Beyond death, they continue their drive to drink blood and serve their mysterious (satanic?) master(s). Knowingly.

Why should audiences assume these reanimated corpses (literally) lost their minds after death? Nothing suggests their cognitive mental state devolved, although they (figuratively) lost their minds as humans, giving in to the most debased psychotic and sociopathic instincts.

The Blind Dead carry the worst traits from their human days: they’re sadistic, cruel, and homicidal. The human Templar Knights represented a collective of torturing serial killers. They lost their lives upon facing justice but never repented, choosing to continue their evil ways after the resurrection.

We see their rampant cruelty on display when De Ossorio once again evokes western film imagery during the controversial scenes where the Blind Dead attack a train. These undead outlaws have robbery in mind, but they want to steal blood, not treasure. And as emotionless as the dead appear, their actions suggest they like to commit murder and mayhem.

Do the Blind Dead need to drink blood to survive, or does pure hedonism motivate their actions? The answer wallows in ambiguity. 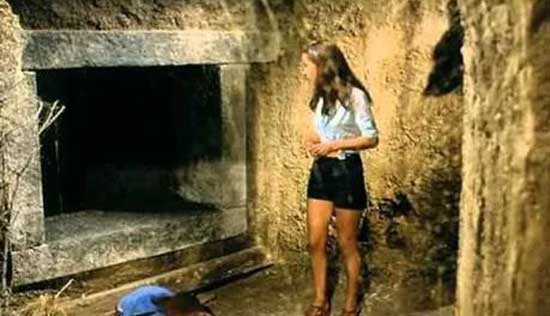 The creatures’ state of mind also embraces ambiguity. We don’t know what’s in their head. What they see and feel remains a dark mystery. So do the motivations behind the slow walk.

The slow, undead walk causes victims to feel panic and fear. Is that an unintended consequence, or do the Blind Dead purposely want to draw more fright from a victim?

Moving slowly may reflect another level of sadism, one conjured up in a twisted human mind and carried over into the undead phase. Why does the undead move so slow? Never overlook the obvious – maybe it’s on purpose, and they’re just downright cruel when doing business.

Tombs of the Blind Dead is available in an outstanding 3-disk limited edition from Synapse Films.