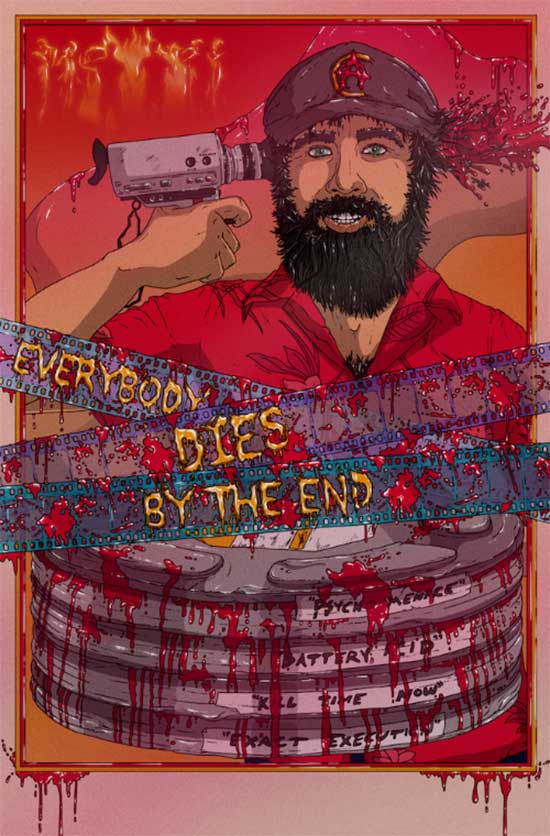 Thursday 11th August, London, UK: Children of Cellulloid are delighted to share the new poster and images for the upcoming horror mockumentary Everbody Dies By The End. The quirky new horror mockumentary will be having its World Premiere at Cineworld Leicester Square as a part of Arrow FrightFest on Monday 29th August.
Everbody Dies By The End is directed by Ian Tripp & Ryan Schafer and stars Bill Oberst Jr., Vinny Curran, Caroline Amiguet, Iliyana Apostolova and Amber Grayson.  Both Tripp and Schafer also star in the film.
A documentary crew is hired to chronicle the making of cult classic horror director Alfred Costella’s final film; An all practical masterpiece with a dark twist entitled ‘Everybody Dies by the End’.
Co-director Ian Tripp was delighted with the announcemnet that Everybody Dies By The End will be celebrating its World Premiere at Arrow FrightFest, “It’s a privilege and a pleasure to have our first movie’s world premiere at Frightfest in London! We are beyond grateful for the opportunity and can’t wait to experience the film with an audience.“
Everybody Dies By The End will have its World Premiere at Arrow FrightFest on 29th August. Tickets can be purchased here: bit.ly/3QgFeKz
Share