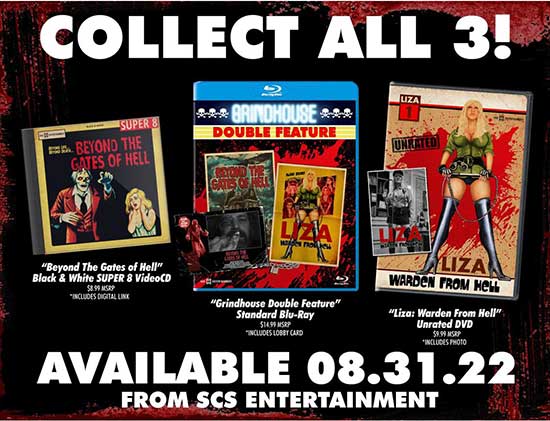 A new Grindhouse Double Feature release of Beyond the Gates of Hell and Liza : Warden from Hell, both from genre staple Dustin Ferguson, will release on Blu-ray this August from SCS Entertainment.

Both films feature genre icon Brinke Stevens, known for her work in Slumber Party Massacre (1982), Body Double (1984), Slave Girls From Beyond Infinity (1987), and many more!

Beyond The Gates of Hell follows a young couple, Katrina (Traci Burr, Hell of The Screaming Undead) and Ian (Eric Larsen, Apex Predators II: The Spawning) as they move into a mysterious old Italian mansion – one that real estate agent Sheryl (Stevens) does explain has a mysterious past – in the countryside.

Will radio personality ‘Godly Gloria’ (Vida Ghaffari, “The Mindy Project”) or Father Thomas (Brad Banacka, “Grey’s Anatomy”) be able to help Katrina and Ian horde of the zombies and a monster (Robert Blankford, “Meathook Massacre”) in the closet!?

A handful of faux trailers, playing, of course, during a brief intermission, are also on the release. Those trailers are helmed by Sam Mason Bell, Dorothy Booraem, Rocky Gray and Dean Houlihan.

The Beyond The Gates of Hell and Liza: Warden From Hell double will be available on Blu-Ray Aug 31 from SCS Entertainment.