Cinedigm announced today that The Film Detective (TFD), the classic film restoration and streaming company, will release the 1960s, sci-fi classic, Battle of the Worlds (1961), on special-edition Blu-ray and DVD, August 9. 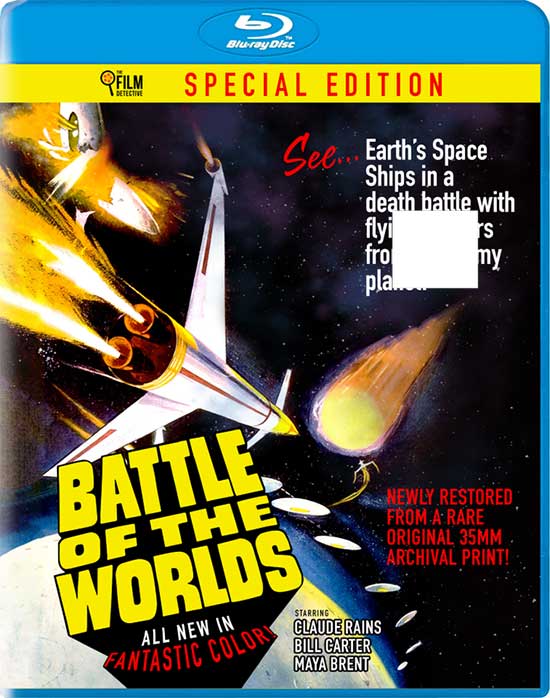 Esteemed director Antonio Margheriti blesses viewers with his ‘60s thriller, ripe from the period of such Italian filmmakers as Sergio Leone, Mario Bava and Dario Argento.

Coming to special-edition Blu-ray and DVD, Battle of the Worlds is a highly anticipated release from TFD, presented from a 4k scan of an original 35mm archival print.

Battle of the Worlds will be available on Blu-ray ($29.95) and DVD ($19.95) on August 9 or fans can secure a copy by pre-ordering now at: www.thefilmdetective.com/world

About The Film Detective:

The Film Detective (TFD) is a leading distributor of restored classic programming, including feature films, television, foreign imports and documentaries and is a division of Cinedigm. Launched in 2014, TFD has distributed its extensive library of 3,000+ hours of film on DVD and Blu-ray and through leading broadcast and streaming platforms such as Turner Classic Movies, NBC, EPIX, Pluto TV, Amazon, MeTV, PBS and more. With a strong focus on increasing the digital reach of its content, TFD has released its classic movie app on web, Android, iOS, Roku, Amazon Fire TV and Apple TV. TFD is also available live with a 24/7 linear channel available on Sling TV, STIRR, Plex, Local Now, Rakuten TV and DistroTV. For more information, visit www.thefilmdetective.com.

For more than 20 years, Cinedigm has led the digital transformation of the entertainment industry. Today, Cinedigm entertains hundreds of millions of consumers around the globe by providing premium content, streaming channels and technology services to the world’s largest media, technology and retail companies.

Battle of the Worlds