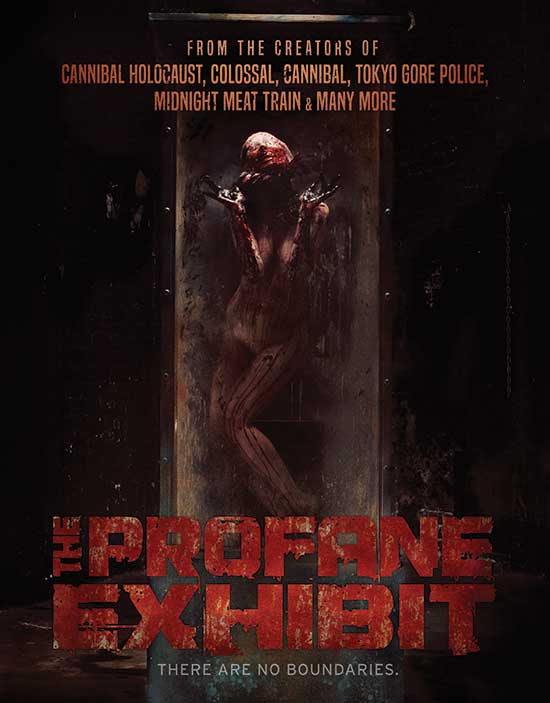 Buffalo Dreams Fantastic Film Festival will host the world premiere of the notorious and long-awaited horror anthology The Profane Exhibit, executive produced by Amanda L. Manuel, who also served as a writer and actor. An incomplete version of the film has screened at festivals in the past, but Buffalo Dreams will premiere the finished film in its final form, as supervised by Stephen Biro of Unearthed Films, which will release it on Blu-ray. The ninth season of Buffalo Dreams runs August 19th – 25th at Dipson Theatres Eastern Hills Cinema in Williamsville, New York.

The Profane Exhibit began production in 2009, and several of its segments screened at festivals in 2014. The road to completion has been fraught with challenges. The final version includes 10 segments, not 12, rearranged in a different sequence, with extensive post-production. The large cast includes Caroline Williams, Clint Howard, Eihi Shiina, AmberLynn Walker, Dan Ellis, Maki Mizui, Thomas Goersch and Tina Krause. Due to the extreme content of this film, viewer discretion is highly advised!


Buffalo Dreams co-founder Gregory Lamberson says, “Like many horror fans, I’ve heard about this film for years, often in whispers, and never thought I’d see the day when it would be released. It’s legendary. I ran into Michael Todd Schneider a few times at shows over the years, and he provided discreet updates. Now it’s actually finished, and it looks beauti

ful in a way horror fans will appreciate – and we’re showing it on a big screen in all its gory, gothic, transgressive glory.”

Unearthed Films Owner and CEO, Stephen Biro adds, “I am thrilled to be working with such a talented team of directors and filmmakers and to be given the chance to finish the film, The Profane Exhibit. I think the horror fans will squeal with delight knowing that after 13 long years, this elusive film is finally out of the shadows and now coming to select film festivals for their viewing displeasure.”