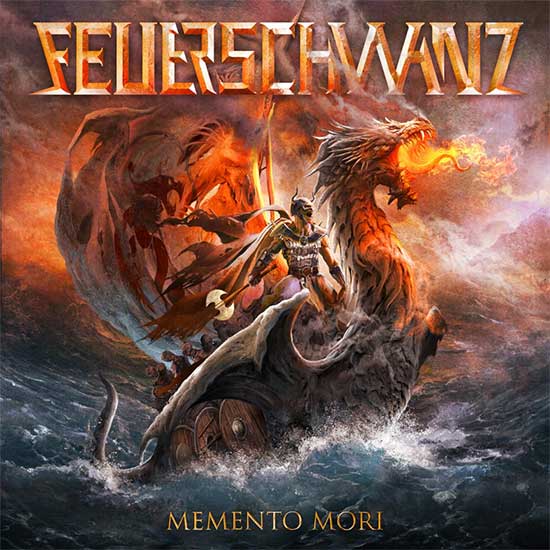 New Album, Memento Mori, out December 31, 2021 via Napalm Records
Get Your Copy HERE!

Germany’s number one medieval folk rockers, FEUERSCHWANZ, are waiting with a very special Christmas present. “Krampus” already is the fourth official music video, after “Untot Im Drachenboot“, “Memento Mori“, and “Warriors Of The World United (feat. Thomas Winkler, Saltatio Mortis, Melissa Bonny)” – the latter has been in the Top 20 of the YouTube trend charts.
Which song could fit better to a FEUERSCHWANZ Christmas than “Krampus”? The demonic companion of St. Nicholas is impressively depicted in the accompanying music video as an unholy seducer. The single shows once again the musical range of the band, which finally says goodbye to medieval fun rock on Memento Mori and releases a song with strong melodic powermetal influences.
FEUERSCHWANZ on “Krampus“:
“When the days are shortest and the twelve days of Christmas approach, the winds move through the air with a frightful groaning and moaning, then you best lock yourself up at home and close the windows, because Krampus is doing his rounds again! The video and the song is our Christmas gift to you – may it bring you well through the holiday season! If we may also wish something from you, it would be that you order our new album! Happy holidays to all of you!”
The new album Memento Mori will be released on December 31, 2021 via Napalm Records and will continue the success story of the medieval rockers from Germany / Franconia! On the new album, FEUERSCHWANZ finally take a step away from the simpler humor of earlier days to become one of the most important bands in German folk rock.
With chanting violin playing, Memento Mori starts its heroic journey with its eponymous opener. The song turns out to be a melodic rock anthem with a well-known medieval character, a blazing guitar riff and life-affirming lyrics. On “Untot im Drachenboot”, the squad around Captain Feuerschwanz sets off for new musical shores in a Viking ship full of undead warriors. “Rausch der Barberei”, on the other hand delivers a violent, raw voice and driving drumming that send its listeners into unbridled frenzy. On “Krampus”, FEUERSCHWANZsing in a canon of vocals and instruments about the ancient legend of the demonic companion of St. Nicholas, who is dressed in fur and a horned mask. On the ballad “Das Herz eines Drachen” (The Heart of a Dragon), the medieval folk rockers show their sensible side. In a fire lit by burning guitar sounds and flute melodies, a warrior mourns his fallen father with his head held high. “Hannibal” on the other hand embarks on a raging battle of powerful choirs, swirling violin and guitar solos and driving drums, led by army commander Hannibal. The crowning finale of the almost 40-minute adventure is provided by “Skaldenmet” with its proudly advancing bass.
In typical FEUERSCHWANZ manner, Memento Mori is about great adventures, past battles and outstanding heroic deeds. FEUERSCHWANZ manage to stay true to their trademarks and at the same time venture into new musical realms. Fans of the band can look forward to an extensive deluxe edition of the album, which extends the running time of Memento Moriby almost double! Two additional CDs feature instrumental versions of all eleven tracks as well as the cover CD Die Glorreichen Sieben (The Magnificent Seven), which includes seven epic reissues from Amon Amarth to Die Ärzte and The Weeknd.
As a special highlight, some versions of Memento Mori will feature a bonus CD with seven cover songs by Manowar, Amon Amarth, but also O-Zone, among others.
Full track-list for Memento Mori:
1.   Memento Mori
2.   Untot im Drachenboot
3.   Ultima Nocte
4.   Rausch der Barbarei
5.   Krampus
6.   Feuer & Schwert
7.   Das Herz eines Drachen
8.   Rohirrim
9.   Am Galgen
10. Hannibal
11.  Skaldenmet
Memento Mori will be available in the following formats:
·3-CD Earbook (48 Pages)
· Deluxe Box (Inkl Mediabook, Flag, A5 Wall calendar, 8 exclusive postcards, hit flask and clothbag)
·Vinyl Box (incl.2 Vinyl, 48-pages book, slipmat)
·2 Music Cassette orange
·2 Music Cassette light blue
· 2-CD Mediabook + 40 pages booklet and patch
·1-CD Jewel Case + 20 pages booklet
·1-LP Gatefold Vinyl black
FEUERSCHWANZ on the new album:
“You take nothing with you to your grave, except your coffin… Memento Mori is the direct successor to Die Letzte Schlacht! The world of Hauptmann Feuerschwanz is in flames, overrun by the living dead and scourged by religious zealots… All of this sounds frighteningly real, even in Anno Domini 2021, so it’s time to defy the storm once again and celebrate life. Let’s live here, let’s live now – until death sharpens his knife!”
Get Your Copy of Memento Mori NOW!
Share