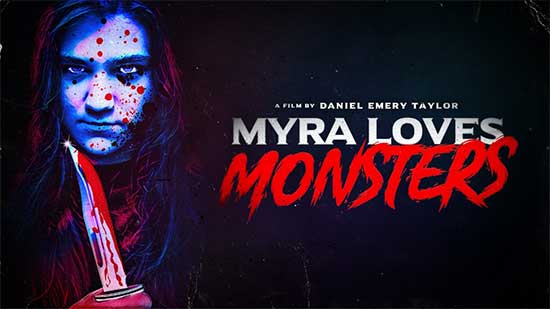 Birmingham, Alabama – Debtor Entertainment today announced the launch of the crowdfunding campaign for their second feature film, MYRA LOVES MONSTERS, from veteran writer/director/actor Daniel Emery Taylor. Daniel is known for his role as Darryl in the campy 80s classic THE RETURN OF SWAMP THING, and more recently for writing and co-directing THE HOSPITAL and CAMP MASSACRE. His solo directorial debut, IT’S JUST A GAME, played festivals in 2019 to positive reviews and was released on DVD and streaming platforms by distributor Wild Eye Releasing in October 2020.

Myra Loves Monsters is set to feature an ICON OF HORROR – a man who boasts a cinematic kill count in the hundreds. His name cannot be divulged due to contractual obligations, but he is fully on board – pending funding. Also attached is the amazingly talented Paul T. Taylor. Paul is perhaps best-known to horror fans for portraying Pinhead in 2018’s HELLRAISER: JUDGMENT. In addition, international recording artist Alan Z is set to appear in the film. Alan is no stranger to performing and his music has been heard in Netflix’s WU ASSASSINS and The CW’s iZOMBIE. Set to star as Myra Tripp is up-and-coming actress Nadia Eiler. Nadia is a veteran of the New Orleans theatre scene and recently began her film career.

The crowdfunding campaign for Myra Loves Monsters is live on Kickstarter, with fantastic rewards offered to backers – including exclusive behind-the-scenes content, screen-used props and more. Visit kickstarter.com/projects/demerytaylor/myra-loves-monsters-unique-female-lead-horror-feature/ for more information.