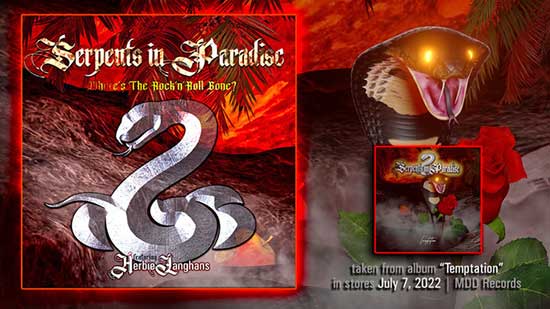 On 8 July, Serpents In Paradise will release “Temptation”, their impressive debut via MDD Records. “Where’s The Rock n Roll Gone” is the first sample of the eagerly awaited long-player, on which Gianni Pontillo (Victory), Stu Block (Ex-Iced Earth), Herbie Langhans (Firewind, Avantasia), Mark Fox (Shakra) and Alex Kühner (High Tide) do the honors and give the 11 down-to-earth, solid hard rock songs a voice, and for the most part also contributed the lyrics themselves. The track with and by Herbie Langhans, which was released today, appears both as a lyric video on Youtube and as a digital single on all common streaming platforms – and is probably also the answer to the question posed in the song title. The final track list of the album, incl. the respective guest musicians can be found below!