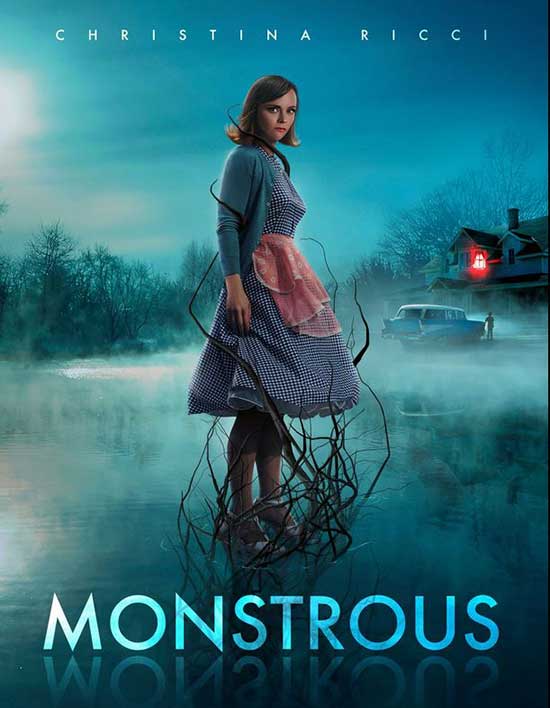 Story centers on a traumatized woman fleeing from her abusive ex-husband with her 7-year-old son. In their new, remote sanctuary they find they have a bigger, more terrifying monster to deal with.

SPOILER ALERT:  To properly discuss “Monstrous”, information that may reveal plot details will be discussed. If you wish to view the film without foreknowledge of the plot developments, please check out the film prior to reading this review. If you don’t really care, pull up a seat, and let’s rap.

“Monstrous” has Christina Ricci all dressed up in the finest, stereotypical dresses, blouses, and skirts straight out of Hollywood’s version of the late 50s and early 60s. She spends her time repeating the patter from a Hotpoint commercial featuring America’s white-bread mom, Harriet Nelson.

Meanwhile, her young son, 7 or so, is having a total breakdown because a creature from the pond next to their new home keeps trying to drag him out of the house and into the moist depths. Well, that nasty old monster doesn’t hold a candle to the threat from the kid’s abusive father, according to Ricci, and she IS the Mom, you know.

The mother struggles with her own fears and doubts while being unable to halt the descent into horror her child is experiencing. Add to that her own oblivious mother, the suspicious folks who collect the rent, and all the kids ignoring her son at the new school.

Sounds interesting, doesn’t it? Not terribly original, but it could be good for an evening’s entertainment.

No, sorry, not happening unless you have rarely, if ever, watched horror movies before. Even the general description hints at the resolution of the tale, if you are a fan of “kids-at-risk” horror films.

First big issue is that the film feels like other films that took different spins to the “haunted” new house concept with “You’re Not Alone” and “The Hole in the Ground” being two random examples. The set ups for the “scares” are telegraphed. The creature, while well done with CGI, is fairly bland and does not drive the fear like it should. The kid being in peril time and again belabors the point that there is something weird about the young boy. And how many times do they have to show Ricci looking around suspiciously with those large, beautiful eyes of hers?

Second issue would be the simple fact that the film does not seem to stick in one’s head. I literally forgot the title four hours after watching the entire film. No scenes stood out in my head. Similar comments popped up in reviews online. Newbies to horror films or casual movie watchers might attempt to defend “Monstrous”, but I’d bet half of my next paycheck that even those folks won’t recall this film in a month or so.

The third problem is probably the biggest one, and here is where spoilers kick in.

If you haven’t figured it out from the film’s plot mentioned above, most of the story is in the head of Christina Ricci’s character. She suffered a loss so painful that she refused to face it and retreated to an earlier time that seemed predictable and controllable. Other movies have used similar plot devices and did it well. Here, the writer, Carol Chrest, makes an attempt. I say “attempt” because, if the entire film is Ricci’s character’s delusion, we should NEVER see anything through her child’s eyes as he would literally not exist to have a point of view. Instead her child coming to terms with death, Ricci as the mom needed to come to terms with the concepts of death and loss as her son’s tragic death caused her mental breakdown. 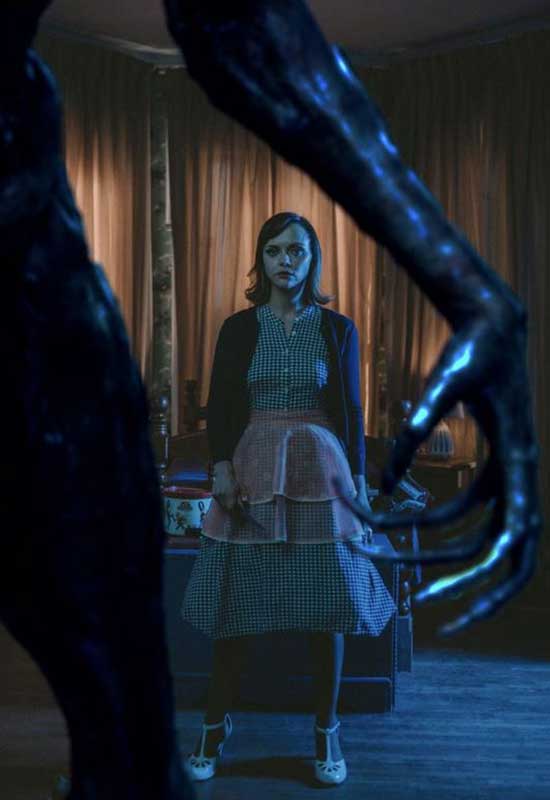 Casting aside being forgettable as well as poorly-structured, “Monstrous” does have a few up sides. The photography is mostly crisp, and the colors are vibrant. Christina Ricci goes all in to give a performance that deserved a better movie and script. Also, seeing Colleen Camp in this is a definitely wakeup call that we’re all getting older.

“Monstrous” (2022) is fine for your parents or grandparents who want to feel they are adventurous by watching a “spooky” movie. Longtime fans of horror should avoid unless you just gotta have your grownup Wednesday Addams fix.