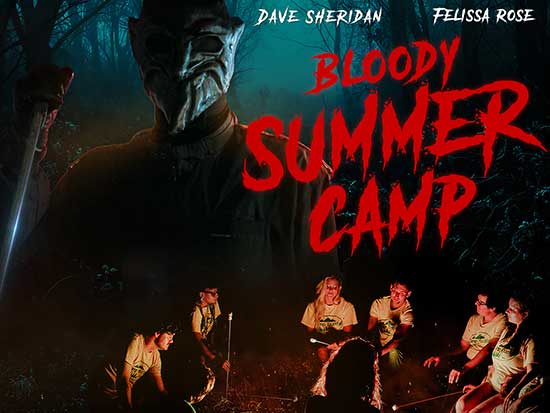 Charlottesville, Va. 06/06/22 – 80’s summer camp slasher throwback, Bloody Summer Camp is headed to Cable, VOD and DVD/Blu-ray next week. Gravitas Ventures has acquired distribution rights to the film and is set to release the Felissa Rose camp slasher on June 14th on cable and internet VOD services.
Bloody Summer Camp is a crowdfunded camp slasher film that takes place in 1986 at the fictional Camp Trustfall. A group of counselors are targeted and picked off one by one by a murderous figure wearing a devil mask. Felissa Rose (“Angela” from Sleepaway Camp) stars in this nostalgic 80’s throwback along with fellow Victor Crowley co-star Dave Sheridan. Sheridan is most well-known for his role as Doofy in Scary Movie.
Bloody Summer Camp has been praised for it’s nostalgic 80’s feel as well as it’s use of practical effects. Bloody Summer Camp is a Slasher 15 Production film and is written and directed by David Kerr.
Bloody Summer Camp is currently available for pre-order on iTunes, Apple TV and Amazon VOD and will be available on many other popular cable and internet VOD services June 14th.
Share