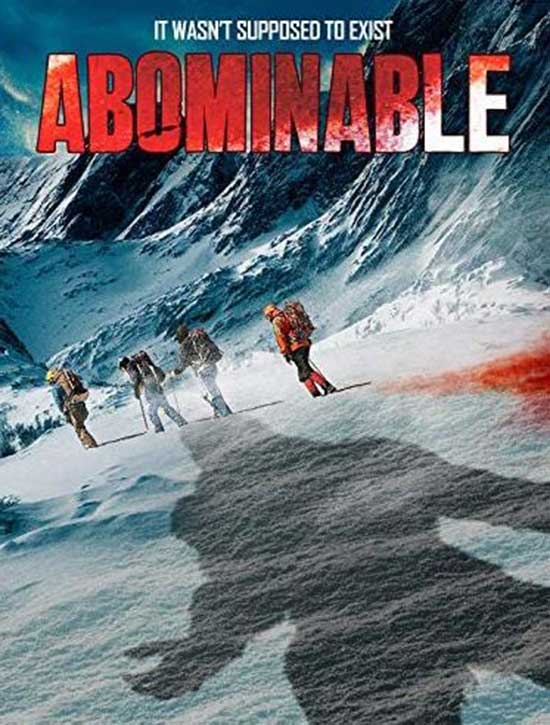 A scientific expedition team searching the Himalayan mountains for a rare plant which could change the face of modern medicine find themselves hunted by a territorial yeti.

When I was working up this review in my head, I had a couple of intros that I considered, but could not pick one.

Option One: How do you review a movie that is almost as bad as “Birdemic: Shock and Terror” but not nearly as entertaining?

Option Two: What can I say about a movie that sums up my thoughts with its own title – “Abominable”?

After seeing an old guy chased through a snowy back pasture before something attacks him, we are given a team sent to find that same guy whacked in the pre-opening-credits scene. Seems the old guy was a doctor seeking the rare Yeti plant that can cure everything and make everyone immortal. Sure. This team sets up in a building in the big middle of freaking nowhere, according to the dialogue. During exposition dumps, we learn they need to set up beacons for extraction, the surrounding area is unexplored, a time anomaly might be nearby, and – oh, yeah, there is a huge storm blowing in. No pressure, right?

The team splits up to place the beacons, which look like small bench grinders with the protective shields still in place. Yeti attacks various people including an utterly random guy. Lots of back and forth as characters spew jargon-laced verbal diarrhea that would be considered laughable in a Jerry Warren or Robert L. Lippert giggle-fest. Conversations that start, freeze, reboot, enter non sequitur data, then continue with awkward and enthusiastic head nods and eye blinks.

There are betrayals and sacrifices (by the actors’ agents and of the actors’ careers, respectively). Guns are fired into empty space. A few poor souls get ripped up in gore scenes that do not do the decent makeup effects justice. Announcements of new deaths are met with little more than casual winces. People with supposed military training have no idea how to properly hold and/or carry weapons.

For the love of all that is holy! How did the building in the middle of freaking nowhere get built? There’s clearly a ROAD in this vast nothingness, but no one knows about this location with unmapped areas and a freaking TIME ANOMALY? Were the builders hassled by the Yeti? And isn’t the Yeti in the Himalayas? If this team is there, how does a local American sheriff’s office show up at one point?

Since we are asking questions, why does the film list filming locations in Poland and Russia, but show the principle outdoor photography done in Massachusetts? From the looks of the film, it was shot in an empty park activity building and the same three acres of trees viewed from different angles. I mean, laying out that level of expense on a film that the filmmakers had to know was streaming-service fodder? Very odd.

Let me be an inappropriate male and say that the true highlight of this film is the lead actress, Katrina Mattson, who plays Sarah, a former Special Forces operative. She is quite appealing, though this film does not show her at her best. As far as acting, this film is not a shining example to put at the top of your demo reel. I can blame either the leaden dialogue that is either littered with tech nonsense or so sparse that grunts would have been better, or limp direction. Instead of attempting to white knight (or is it “simping”?) for Ms. Mattson, let me say that she would make an awesome post-college Velma Dinkley for any indie filmmaker with the guts to make a live-action Scooby Doo clone.

I get that every movie is not gonna look like some high-end Hollywood production, and I honestly try to cut indie filmmakers as much slack as humanly possible (most of the time). “Abominable” (2020) just feels like it is attempting to be the worst Yeti/Bigfoot movie since “Shriek of the Mutilated” in 1974, and it comes pretty damned close. Even “Mutilated” had a cooler monster outfit than this film, and the original cut had “Popcorn” by Hot Butter on the sound track. No such luck here.

“Abominable” (2020) is a film that only the most insanely obsessive Yeti/Bigfoot fanatics should seek out. Everyone else would be better served by straightening your linen closet or purging your refrigerator of unintentional biological experiments.