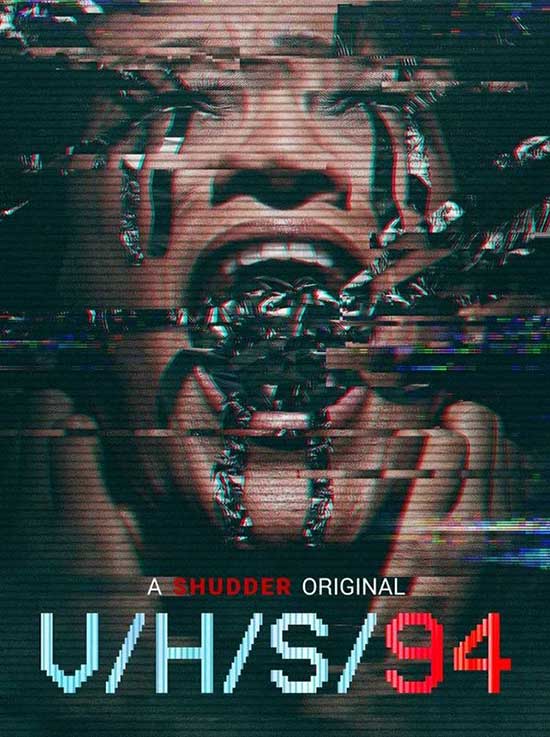 A police S.W.A.T. team investigates about a mysterious VHS tape and discovers a sinister cult that has pre-recorded material which uncovers a nightmarish conspiracy.

To be honest, I was shocked to find that it has been nearly seven years since the last “V/H/S” installment, “V/H/S: Viral”, hit the market when the newest one landed in my review bin.

Then I went back and watched the first three films for context. After “V/H/S: Viral”, I’m shocked the series survived given how lame it was compared to the first two, plus the fact it utterly crapped on the franchise’s focus on “found footage”. Skaters fighting skeleton cult members in a canal? A magic cape story that felt lifted straight out of an episode of “Friday the 13th – The Series”?

“V/H/S 94” 2021, for those unaware, is the fourth film in a series of anthology films built around the concept of VHS tapes that have “found footage” of twisted, weird, and downright gross events. “94” picks up, logically, after “V/H/S 2”. Why? The original film dealt with a single collection of such tapes. The first sequel advanced the wrap-around story to include an underground network of people obsessed with viewing/collecting these demented tapes. “94” follows a S.W.A.T. team invading a warehouse/studio where the cult members have gathered for a reason. “Viral” leapt ahead and attempted to mesh the concept with smartphones and internet “fame” and failed miserably.

What do we get after a 7-year hiatus?

As mentioned, the wrap-around tale, “Holy Hell”, takes viewers inside a stronghold of the video cult. Like a warped variation on the Jonestown Massacre, cult members, all missing their eyes, are found dead in chairs facing televisions of different sizes, all stacked or piled on top of other TVs. As the officers search the location for life and/or evidence, various team members, and the audience, are treated to four of the creepy tapes.

“Storm Drain” deals with a local news reporter and her cameraman as they do a light-hearted story about a silly local myth. Thanks to a jackass further up the chain of command, they are asked to shoot footage inside the sewer drain where the recent sighting took place. As they attempt to wrap up the distasteful job, a discovery leads them further and further into the drain system, finding bedding, luggage, handprints, empty bottles, and other clues that there are people living in the dark tunnels. When the inhabitants of the sewers kidnap the two, it becomes clear that behind every myth is a bit of truth.

“The Empty Wake” has a young employee, Hayley, at a funeral home being left in charge of a wake. Just keep an eye on things and swap out the VHS tapes in the cameras as per the family’s request. Simple enough, right? Meanwhile, various powerful storms are moving into the area, bringing rain, hail, and tornados. As the night drags on, only one person appears, and he disappears after uttering what sounds like a chant. Then the casket begins to move…. 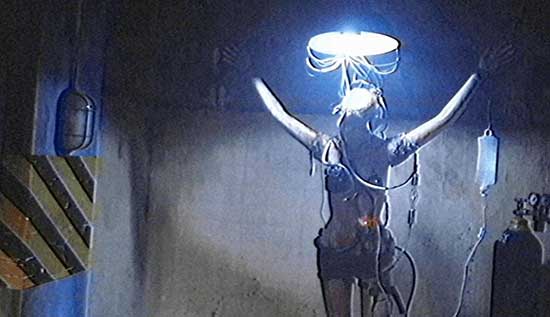 “The Subject” takes place in the clandestine workshop of a mad scientist who seeks to combine humans with mechanical prosthetics. Unfortunately, his test subjects are not there voluntarily. One young lady gets a radical makeover, turning her into a heavily-armed video camera, and she comes to life shortly before a special task force arrives to stop the doctor and destroy all of his creations. Both girl and strike force get to play hunter and hunted as the hybrid creature seeks to survive at any cost.

“Terror” takes you into a fringe group of religious militia members who are planning a terror attack to further their agenda. A terrorist bombing to rival the explosion at the Alfred P. Murrah Federal Building in Oklahoma City. Instead of using conventional methods, these activists have a secret weapon – a real vampire. Since vampires combust when in contact with sunlight, they intend to use the vampire’s blood as their bomb. 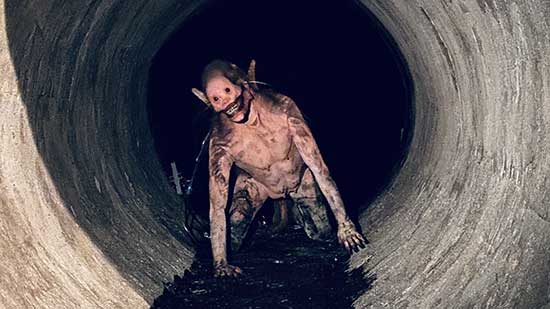 The wrap-around segment with the S.W.A.T. team is the weakest of the lot with an ending that feels more like an ad for the V/H/S franchise than a satisfying conclusion. In the end, the story gets the audience to a place where the other segments can fit into the overall flow of the film. Some blood with the most graphic bits towards the end.

The first individual tale, “Storm Drain” has the right feel of local reporters stumbling into an area that is not theirs to enter. Having done some urban exploring myself, I can confirm people will make a nest in the strangest of places when living off the grid. This short captures that unreal sensation, then gives an ending that, while cheesy, manages to be uncomfortable. Good acting and carefully-shot special effects make this a fun segment. 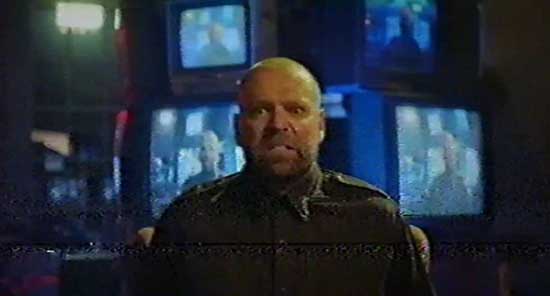 Ever have a nightmare that starts out with a sense of apprehension and builds into an all-out horror show? That sums up “The Empty Wake”. Some reviewers have said it is boring, but the short feels more like a slow burn. Without the extended lead in to the more intense shocks near the end, the wild scenes of horror would just be a dandy showcase for make-up and digital effects. Again, good performances and a genuinely nasty-looking corpse make the payoff here worth the wait.

Timo Tjahjanto made “Safe Haven” for “V/H/S 2”, and it was one of the best crafted and brain-squishingly twisted segments of the entire series. Here, he spins a dark cyber-paranoid tale brimming over with gore, severed limbs, explosions, and body horror. Some of the digital effects aren’t quite up to snuff (no pun intended), but the whole film, once the action begins, moves at such a swift pace that you register the violence long before your brain says, “Hey, that blade was at an odd angle!” or “Was that monster’s head a digital cartoon?” Hands down, “The Subject” is the biggest splatter event in this anthology and fast paced fun. 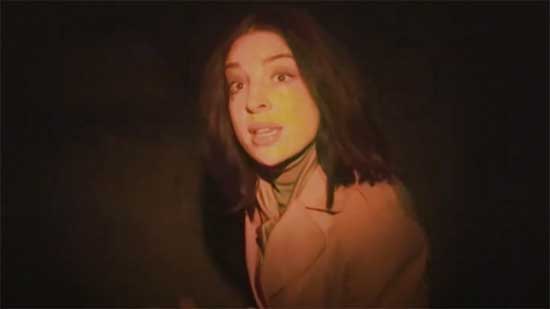 The final segment, “Terror”, feels incomplete. The idea of a religious group using supernatural means to deliver an act of terror is pretty interesting due to the moral conflicts, but then you get to thinking about the poor vampire who gets shot in the head on a regular basis so his blood can be harvested, and how well can you trust a group of backwoods dolts with no real military training? So many questions that this concept deserves at least a feature film if not a series running about 6 hour-long episodes to flesh out and deal with the implications of what is happening in this short. As is, you get some brutal gun violence and some entertaining horror as the militia’s plans go off the rails.

Overall, “V/H/S 94” is a return to what makes this franchise so much fun – retro feelings with shockingly surreal horror. If you like the other films in the series or you just enjoy anthology films, give “V/H/S 94” a try. Hopefully, it will wash away the bad aftertaste “V/H/S: Viral” left.