Home | News | MASSACRE AT CENTRAL HIGH Is Back In Class This September! 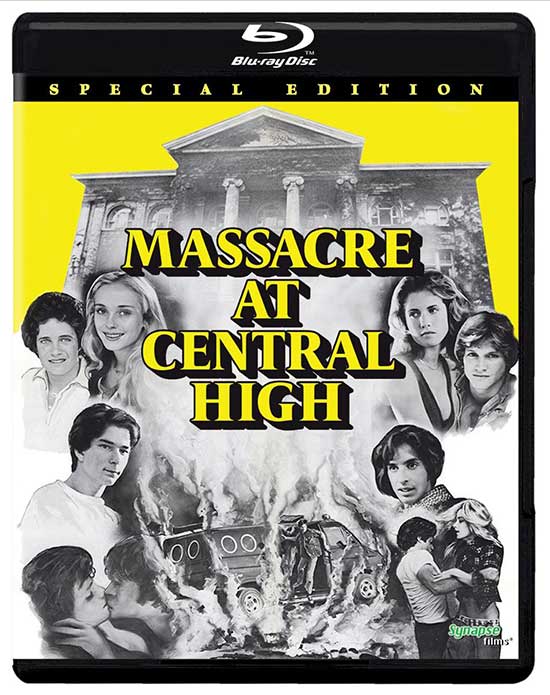 Renee Daalder’s MASSACRE AT CENTRAL HIGH remains one of the premiere genre films of the 1970s, a powerful and influential blend of political allegory, social commentary and exploitation film that remains as compelling today as it was in 1976.  Plagued by distribution woes, it would find an audience in the early days of cable TV and VHS but remained out of circulation for decades.  Now, Synapse Films’ Blu-ray release of MASSACRE AT CENTRAL HIGH arrives just in time for students to go back to school, newly remastered (supervised by director Renee Daalder)  with hours of special features befitting this genre classic.

When new student David (Derrel Maury) arrives at Central High, he discovers that it is lorded over by a gang of bullies who rule the school through intimidation and violence. David’s friend Mark (Andrew Stevens, THE FURY) encourages him to join this dominant clique, but instead David stands up for their victims, and the gang cripples him in retaliation. Soon David begins taking steps to end their reign of terror permanently, setting in motion an explosive cycle of killing that may not end until no one is left to graduate!

Co-starring Robert Carradine (REVENGE OF THE NERDS), Kimberly Beck (FRIDAY THE 13TH: THE FINAL CHAPTER), and Cheryl “Rainbeaux” Smith (REVENGE OF THE CHEERLEADERS), MASSACRE AT CENTRAL HIGH is the startling American debut of Dutch writer/director Renee Daalder. While packing in all the sex and violence that drive-in audiences demanded, Daalder also delivers a potent allegory about fascism and power structures in a high-school world where adults are absent. A cult and critical favorite since its 1976 release (and an evident influence on the classic HEATHERS), MASSACRE AT CENTRAL HIGH now makes its long-awaited restored and remastered BLU-RAY debut, so you can study Daalder’s classic like never before and educate yourself with all-new special features!

– HELL IN THE HALLWAYS: The Making of “Massacre at Central High” – New “making of” documentary produced by Red Shirt Pictures.

– Newly translated removable English subtitles for the deaf and hard-of-hearing.

This release of MASSACRE AT CENTRAL HIGH is REGION FREE for world-wide playback.

SUBTITLES: English for the Deaf and Hard-of-Hearing