Italian horror master Dario Argento elevates the giallo genre to new heights with 1982’s Tenebrae, a darkly humorous and notoriously grisly murder-mystery that many consider to be one of his finest works. Now, Synapse Films, in conjunction with Arrow Video, makes this gory suspense classic available for the first time on UHD in a new 4K restoration for Tenebrae’s 40th anniversary!

American mystery author Peter Neal (Anthony Franciosa, Death Wish II) comes to Rome to promote his newest novel, Tenebrae. A razor-wielding psychopath is on the loose, taunting Neal and murdering those around him in gruesome fashion just like the character in his novel. As the mystery surrounding the killings spirals out of control, Neal investigates the crimes on his own, leading to a mind-bending, genre-twisting conclusion that will leave you breathless! 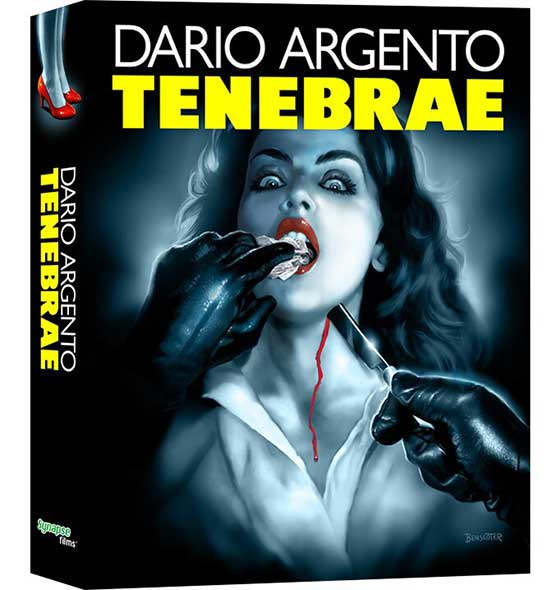 Dario Argento’s Tenebrae will be presented in a three-disc 4K UHD/Blu-ray 6000 piece Limited Edition boxed set nationally distributed by MVD, along with an additional strictly limited 2000 piece “variant” cover ONLY available from the Synapse Films website and our friends at Diabolik DVD.

– Illustrated collector’s booklet featuring writing on the film by filmmaker Peter Strickland and Argento biographer Alan Jones, an interview with cinematographer Luciano Tovoli and a new, in-depth analysis of the film by critic Ashley Lane 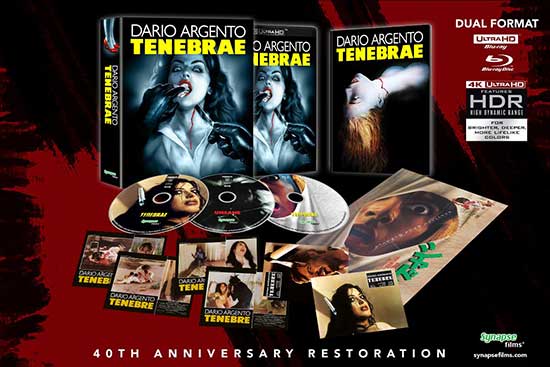 – English subtitles for the Italian soundtrack

– Yellow Fever: The Rise and Fall of the Giallo, a feature-length documentary charting the genre from its beginnings to its influence on the modern slasher film, featuring interviews with Dario Argento, Umberto Lenzi, Luigi Cozzi and more

– Being the Villain, a newly edited archival interview with actor John Steiner

– Out of the Shadows, an archival interview with Maitland McDonagh

– The Unsane World of Tenebrae, an archival interview with Dario Argento

– A Composition for Carnage, an archival interview with Claudio Simonetti

– The re-edited 90-minute U.S. version, specially recreated for this release from the new 4K restoration of the full-length 101-minute version, exclusive to UHD

– Two audio options: a recreation of the original theatrical experience, complete with jump cuts and sudden audio shifts, and a new, more seamless edit created for this release, both in restored DTS-HD MA lossless English 2.0 mono

– Optional English subtitles for the deaf and hard of hearing

Synapse Films will be making a special limited edition “variant” slipcover version, limited to only 2000 pieces, featuring the classic image from the original Italian Renato Casaro one sheet poster art on the slipcase and an alternate booklet cover image. This edition will be available exclusively from the Synapse Films website (www.synapsefilms.com) and from Diabolik DVD (www.diabolikdvd.com). Retail price and contents remain the same as the nationally distributed version.

Synapse Films will be releasing this set throughout North America on July 26, 2022. Suggested Retail Price (SRP) for the Synapse Films set is $64.95 USD.

While we are sharing assets and working in conjunction with Arrow Films on the product, we have specific requirements for street dates and announcement info with MVD, our U.S. distributor. For now, we’re setting the proposed street date as July 26, 2022. This could change slightly, but we will strive for this date as best we can.