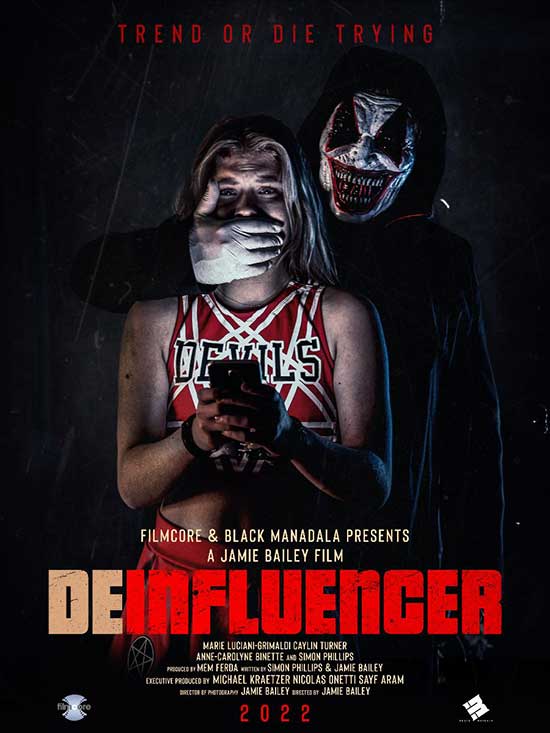 Genre specialized Black Mandala presents Deinfluencer, directed by Jamie Bailey. A prison, a masked psychopath who thinks he is God, and an influential cheerleader who must face challenges to survive. NERVE meets THE STRANGERS in this oppressive psychological thriller that will leave you breathless.
Kelly wakes up to every young girl’s nightmare. She is being held hostage by a masked kidnapper and needs to complete a series of social media challenges to ensure her safety. Things get more complicated when Kelly has to fight not only for her life, but also for the lives of other young women she is holding hostage with. But the masked kidnapper has a hidden agenda for her.
The film stars Simon Phillips (Bruce Willis’ partner in Survive the Game), Marie Luciani-Grimaldi, Caylin Turner and Anne-Carolyne Binette.
Director: Jamie Bailey
Writer: Jamie Bailey
Cast: Simon Phillips, Marie Luciani-Grimaldi, Caylin Turner and Anne-Carolyne Binette
Cinematography: Jamie Bailey
Music: Darren Morze
Visual Effects: Ezequiel Romero
Producer: Mem Ferda
Associate Producers: Michael Kraetzer, Nicolás Onetti, Sayf Aram and Rabia Mustafa