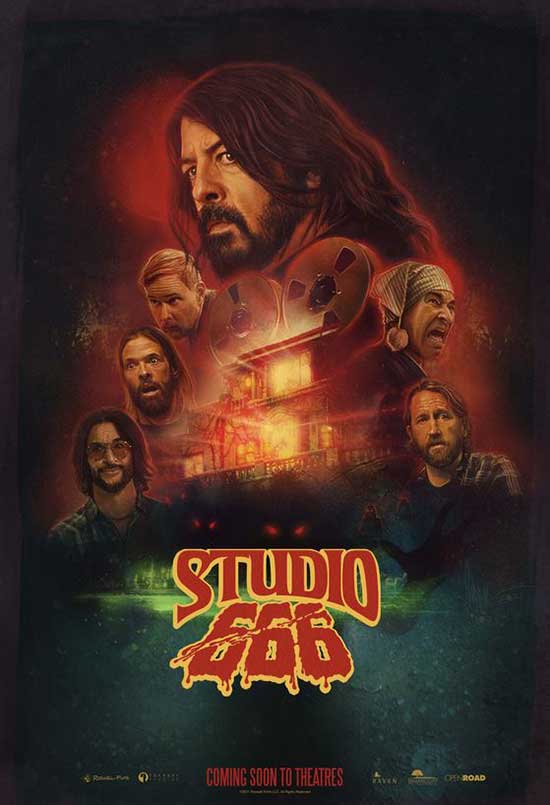 As “Studio 666” begins, Jenna Ortega is crawling across a floor smeared with her own blood as she is stalked by a killer in a Ghostface ma – oh, damn, sorry. My bad.

As “Studio 666” begins, Jenna Ortega is crawling across a floor smeared with her own blood as she is stalked by an unidentified killer. Completely different. How did I confuse those two?

Unlike “Scream” (2022), here Jenna gets her head graphically bashed in with a hammer. Seems her character is a member of a 90’s band who came to some rather nasty ends in an Encino mansion they were using for a recording studio.

Years later, Foo Fighters are being pressured to deliver their next album. Considering it is their tenth, they decide they want to do something like Led Zeppelin and record in a non-studio environment to create a new sound. Within moments, they are scheduled to use a certain Encino mansion for their new tracks.

While the rest of the band have their doubts, front man Dave Grohl senses the acoustics of the place as special. “You guys get this overwhelming sense of death and doom, or that just me?” Well, Dave, if it was just you, the audience would not be watching.

Soon, the forces within the house will seek to dominant or destroy all inside in a bid to escape.

If you curl up to watch “Studio 666” hoping for a scare-fest, you may be a touch disappointed. Face it. Foo Fighters acting weird and playing cool music are the primary attractions here. It is entertaining fan service to the band’s followers. They play mild caricatures of themselves and their public personas. Based on what ends up on the screen, it looks like the guys had a good time without taking their “acting” seriously, which helps the film maintain a fairly light tone in spite of some rather brutal kill scenes.

The film may be aimed mostly at the band’s fans, but horror fans get their money’s worth from the sick kills mentioned as well as many general and specific visual references to iconic horror films. Sure, the plot is as worn out as my older sister’s Monkees original vinyl albums. The nice thing is that the movie knows that and ladles extra helpings of tired tropes and ancient clichés that feel like parodies as the band members litter their dialogue with musical references and F-bombs.

“Studio 666” is, at its heart, a comedy. Is it funny? Not really laugh out loud kind of funny, though it does manage to maintain an amusing tone throughout most of its run time. While the band members land a few great jokes, the supporting cast, especially Whitney Cummings and Will Forte, provide most of the humor that can draw a good laugh or two. The single funniest scene involves Lionel Richie as himself; you have to see the scene for yourself as it is too good to give away.

So far, we have good music, fun atmosphere, gory kills done with mostly practical effects, and band members who don’t embarrass themselves on screen. Seems like a winner.

Except the film clocks in at a mind-boggling 106 minutes. Everyone enjoys a good time, but the plot gets stuck in loop throughout the entire “Is Dave Grohl being possessed?” portion of the film. The scenes could have been trimmed or blended together somehow to shave at least 15 minutes from the run time, and the pacing would be much better. Admittedly, that is a cinematic concern. Most people who will seek this movie out will possibly be watching with likeminded friends, and the repetitive portions might be covered up with everyone listing their favorite Foo Fighters albums or songs.

“Studio 666” is worth checking out if you like rock music (especially Foo Fighters), casual horror comedies, and/or splattery kill scenes. While the film probably will never hit cult film status, it does make for a cool movie to run during your next mildly wild party.

Taylor Hawkins, you and your talent will be greatly missed, not to mention you are in one of the best kill scenes in the entire film. Rest in Peace.