Tim Chizmar is a Best-selling writer, an Award-winning speaker. He has a brand-new film that he wrote and directed called, The Nudels of Nudeland. Tim Chizmar is busy non-stop. He has so many projects coming out. His personality is amazing, he’s so motivating, uplifting, and talented. His film Unchained is available on Amazon and he finished a horror film called, Hell’s Coming For You which is directed by Mark Savage, and starring Tim Chizmar, Patrick Kilpatrick, and Dillion Dilligaf. His books are available on Amazon. You can check out, “Modern Madness: Gateway to the Grotesque. It has an amazing interview with the legendary Clive Barker. Check out the Horrornews.net exclusive with Tim Chizmar. 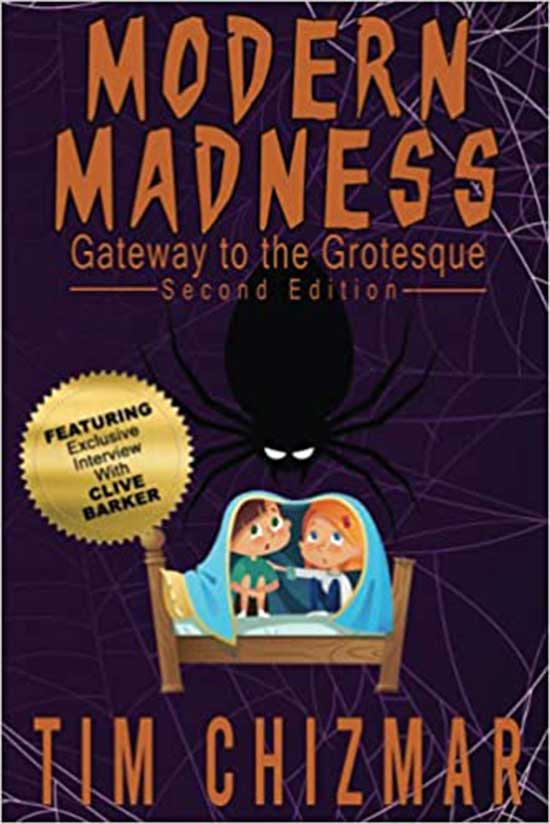 Hi Tim, it’s so great to talk with you. I appreciate you taking the time to talk with Horrornews.net. Please tell us how this idea manifested for you?

Tim Chizmar- When I went to college, I was a graphic design major. I immediately knew that was a bucket list thing. I had to sign up as a nude art model, as soon as I did it, I found that the classes were more embarrassed and shyer than I was.  I became the naked guy on campus. I started looking for the closest nudist resort which was White Thorn Lodge in Darlington, Pennsylvania from where I was going to college at Edinboro University. I started looking into nude artists, and nude photographers. I was so fascinated and I just got it, and it really spoke to me. My interest in horror, lead me to write a screenplay in 2010 called Naked Alien Massacre. I tried to get it funded but you know, but like most art it didn’t fit into a box. So, a lot of the body positive community aren’t the same the people who would want to see blood and guts. The blood and guts people only see nudity as sexual. They only see some naked cheerleader running in the woods from the masked killer. I wanted to do a movie that was a horror film shot at a nudist resort, and there were these aliens or demons that looked at you. The point is, it never happened and it never got funded. So, I did a ton of other projects. I’ve worked on others people’s movies. I’ve worked with everything from Adam Sander projects, punch-up work, stand-up comedy, I wrote pros novels and shorts, and sold screenplays. I did all this kind of stuff and now it’s finally come full circle. My movie Unchained is available on Amazon, and the movie I just shot out here, which is a horror film called Hell’s Coming For You. I’m at a point in my life where I can do what I’m passionate about which is a silly, goofy, naturist, body positive film that was shot cheap, and it was shot indie. It doesn’t have to answer to any of the rules of a studio. The truth is there is a huge market for body positive communities. I wanted to make some entertainment strictly for them. I think it’s going to become a cult classic film.

I love the body positivity aspect of this movie. It’s crazy that some people try to just sexualize nudist or naked people. People get naked every single day and it’s part of life. People get weird, like they see a naked person in a movie or something, and they act like they have never seen a naked person before.

Tim Chizmar- Well, even when you compare the United States to other countries, it’s not that way in other countries.  It’s odd when you stop and think about it. Look, I’m a horror guy, you’re a horror person, we get it, we appreciate the horror stuff. It’s funny that you can watch throats being sliced open on television but people lose their mind if they see a nipple on television. 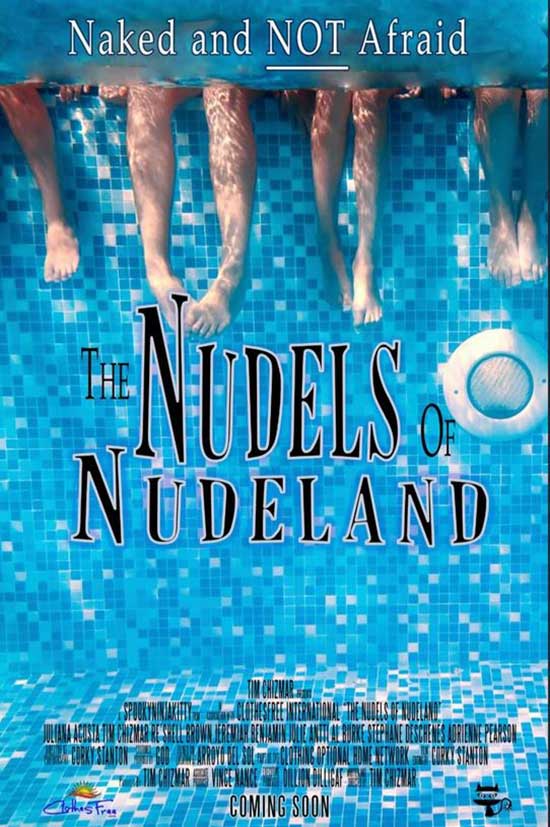 What was it like for you preparing the cast and directing The Nudels of Nudeland?

Tim Chizmar- I made sure that I gave them room to improv. There was a script but I also did a surprise me take. The people who were in the movie had to be comfortable with being nude. I had to have Juliana Acosta. I’ve worked with her for almost a decade, we’ve done nude stand-up comedy tours, improv events but the most important thing for me and the artistic vision was that in real life Juliana and her boyfriend are both nudists. It was important for me that they walk the walk. Jeremiah Benjamin and Joe Filippone, not only did I enjoy working with them but I went ahead and hired them for Hell’s Coming For You which in post-production right now. It worked out the way it was supposed to and I’m blessed, honored, and happy with what I ended up with. This is my Clerks; this is my naked Clerks. 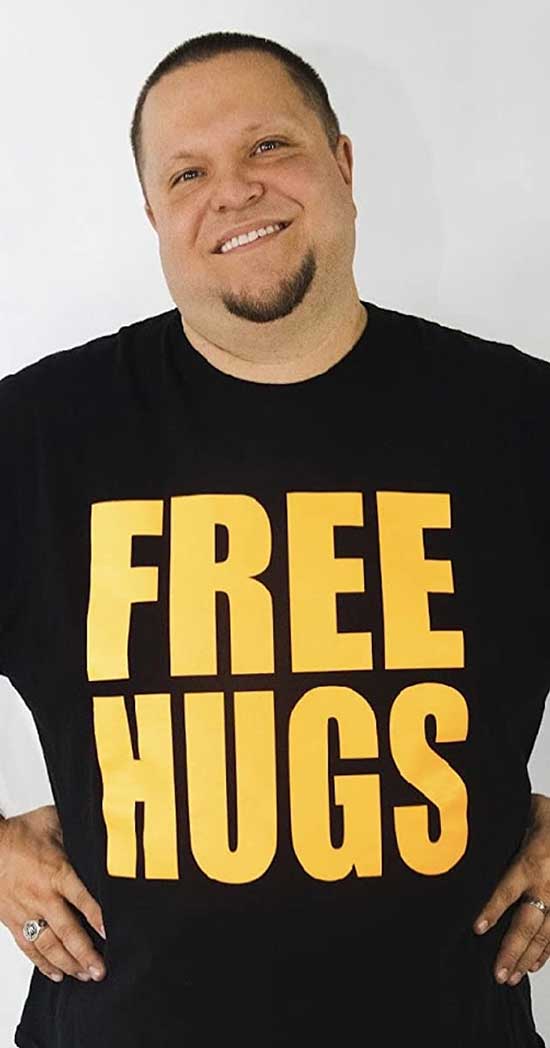 What advice or words of wisdom would you offer in general? For filmmakers, actors, writers, producers etc.

Tim Chizmar- It’s been said before by James Cameron, someone came up to him with a camera and they asked, what is your advice for filmmakers, and his advice was to shoot the movie. Joe Bob Briggs from The Last Drive-In actually ended one of his episodes doing a rant about this. The world creates all these obstacles, issues, and problems so much so, that we feel there is no way to do that thing that we want to do. You have so much at your fingertips, and there is no barrier to entry. Let me tell you something, and I hope this resonates with anybody out there that wants to do a project. When I moved to California, I didn’t know anybody, I grew up in Pennsylvania and I had no contacts, no connections. I landed and wrote a screenplay with two college buddies, this was 2005. Don’t ever be afraid to think outside of the box.

Tim Chizmar- We are in post-production for Hell’s Coming For You. I’m guiding that to the promise land. I have a memoire that’s being turned into my editor in June. I’m ghostwriting for two celebrity memoires right now. I’ve done some work with Clive Barker, and he’s just fascinating. I’ve worked with a lot of interesting people over the years, and I love it a lot. I have a stand-up comedy residency in Las Vegas that I do. We are putting together a tour of disabled comedians so we can highlight folks with disabilities in different cities. It’s called The Blue Zone Comedy Tour because they park in the blue zone. I’ve got a bunch of screenplays. I’m working with Randy Couture on a project. I’ve got a calendar full of stuff. I love go, go, going. I got hired to do comic books. I will be doing five issues of a series that will then be combined for a graphic novel. I’m very excited about that.

That’s awesome. Congratulations on everything. Is there is any advice you took away from working with Clive Barker? Is there anything you can share?

Tim Chizmar- Yes, he’s been very influential on me and my work. The biggest thing I’ve learned from working with Clive is no matter how much success we have within the horror community with events, and conventions. The mainstream still puts horror in a box. He told me if he had to do it over again, he would have called his stuff dark fantasy or thrillers. Even at his level, people stigmatized him because of horror. You probably know, we get sick of having to defend horror. I ran the Horror Writer’s Association, Las Vegas chapter for two years. I was sick of explaining why we write horror, and just because we write horror, we’re not serial killers.

Yes, I get tired of explaining it after a while. No one is perfect, and horror is a beautiful art form.

Tim Chizmar- Clive’s very human. Who is somebody that you look up as a writer, who would you want to have a career like?

Yes, he did. His writing was incredible. I love Anthony Saint Thomas’ work, Nick Kisella, H.P. Lovecraft, obviously Clive Barker, his work is just… It takes your breath away. Tananarive Due, Stephen Graham Jones. Jack Ketchum’s writing might make some people uncomfortable but that’s what it supposed to do. It also makes you think. It’s comforting to me which probably sounds insane.

Tim Chizmar- I grew up watching you know, demonic films. My Disneyland was the horror section of the video store. That’s my early childhood. That’s the stuff that makes me happy and comfortable.

I grew up watching horror movies. I have made some of the most amazing friends who are family because of horror.

Tim Chizmar- The reason I asked you who you look up to is just to tell you that their regular people. We’re all existing at this time, on this planet, at this moment, and in a hundred years we’ll all be dead. There is no guarantee. This is what you got.

Tim Chizmar- It’s a representation of a community. It’s a heightened reality just like Curb Your Enthusiasm or any other comedy but my point is that it exists. There are generations of nudists. It’s a lifestyle for lots of people.

Thank you so much, Tim. It was awesome talking to you. Thank you.

STAY UP TO DATE WITH Tim Chizmar.

HELL’S COMING FOR YOU TRAILER Provided by Mr. Tim Chizmar.

Tim Chizmar will appear in Dark Angels: The Demon Pit.