The opening sequence of Alligator (1980) brings audiences to Florida to watch a man lose a wrestling match – and almost his foot – to an alligator. The spectacle prompts an announcer to say, ”Sometimes the alligators win.”

Hardboiled and burned-out police officer David Madison could substitute many words for “alligator” in that statement, and the sentiment wouldn’t change much. “Bad guys” works. So does “city hall” or “the media,” “the system,” or even “toxic bosses and co-workers.” Madison takes everything in stride – he’s had a troubled career on the police force and tries to put his past and a terrible incident in St. Louis behind him. And then a 30-foot-long alligator shows up, and Madison seems to be the only one to notice. 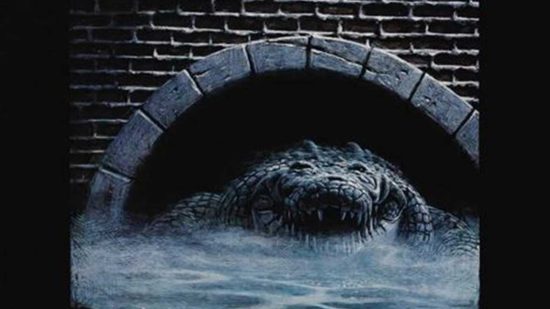 Even when everyone around him sees the massive alligator going on a rampage in an unnamed midwestern city, Madison still finds out no one’s on his side. The alligator isn’t the problem to those in charge. Their concerns center on the public discovering that politicians and their donors created the oversized and out-of-place reptile.

David Madison becomes a nuisance not because he won’t follow procedure while on the trail of an alligator. He’s trouble because he intends to shed light on who’s responsible. 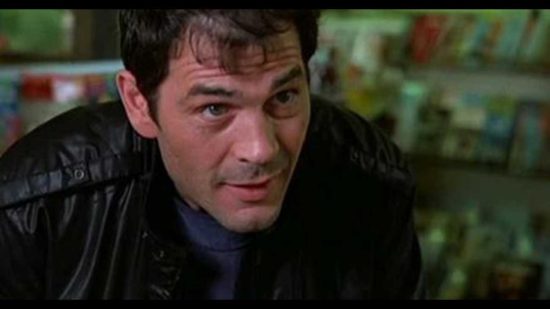 Is Alligator about the giant reptile or the cop? Thanks to the alligator, Robert Forster’s David Madison gains a purpose while risking a second ruined life. They make a duo.

Screenwriter John Sayles noted that the problem with giant monster films is that such a movie loses suspense after audiences see the creature. So, the story needs more depth to become closer to classics like Them! (1954) than turkeys like The Giant Claw (1957). Focusing the narrative on the embattled cop creates compelling melodrama while alligator mayhem keeps the proceedings from becoming dull.

Alligator might not attract movie-of-the-week drama fans, but the feature makes for a fun giant monster movie. And there exists a fine, somewhat satirical character study in the proceedings. 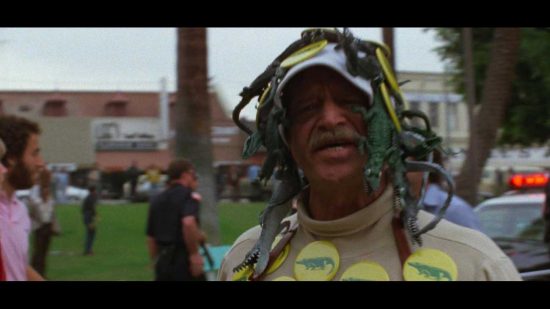 Before transferring to a new police department, Dave Madison’s St. Louis partner died in a shooting. Madison blames himself for the tragedy, believing his fear and improper response led to the death. An internal investigation cleared Madison of any wrongdoing, but he carries the stigma of “letting” a partner die. Fellow officers at his nondescript precinct want nothing to do with him. Madison’s nothing but bad luck, and they let him know it.

Considering what unfolds during Madison’s investigation into mysterious deaths in the sewer, perhaps he is bad luck.

Maybe youth and inexperience led a young cop to join Madison on an evidence-gathering search in the sewer system. Both knew the environment has dangers, but who would expect to find a giant alligator roaming under the city streets? And who will believe Madison’s explanation about the rookie cop’s disappearance? Getting eaten by a giant alligator seems a tad much to swallow. 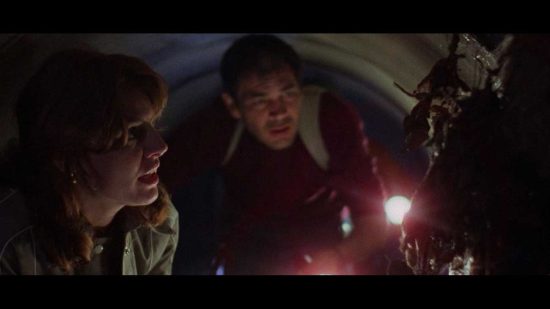 As described in the Blu-ray commentary, the initial setup suggests proving the alligator’s existence stands as Madison’s redemption. Proving the alligator exists means proving he did not kill the young rookie and indirectly freeing Madison from the shadow of the first partner’s death.

Then, the story shifts from a somewhat predictable thematic direction right around the halfway point: a reporter’s death delivers photographic proof of the alligator’s existence. Madison’s Quixotic journey to free his soul and speak truth to power seems upended. Or is it?

The alligator serves as neither Madison’s main antagonist nor a source of redemption. The alligator acts as a vehicle for Madison to coldly stick to those who treat him as an outsider. The cop’s not on a Quixotic journey. He’s on a Hero’s Quest that involves antagonizing and showing up the sources of his misery: City Hall, the Police Bureaucracy, and the City’s Elite.

A Sewer of a Career

David Madison finds himself boxed into a life tied to a seemingly unfulfilling career.

Working a job that you can’t stand and working with people who don’t like you seems like an awful way to make a living. But, there’s no way out until the day comes for Madison to retire. For a “working stiff, taking a walk after putting 15 years in because you don’t get along with isn’t practical. Yes, the job can negatively affect a demoralized employee, but consider the retirement benefits. Plus, things aren’t so bad that sticking it out longer would be intolerable.

So David Madison continues to put in his time, clocking in and clocking out, letting the days on the calendar pass. The man embraces a defeatist onward march to a pension. 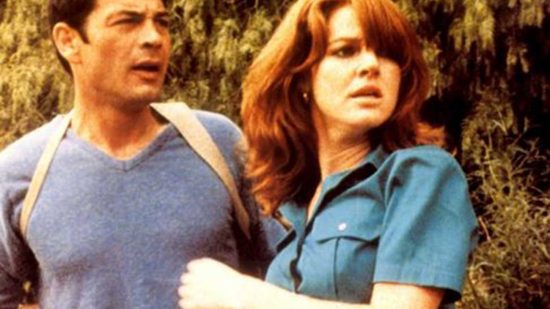 Along comes an alligator that throws a wrench into day-to-day defeatism by giving the detective a new purpose. You’d think. Instead, the response Madison receives is, essentially, “Okay, there’s an alligator eating people in the sewer. We think it is a ‘regular’ alligator, though. Dave’s exaggerating how big it is.”

When the guy wins, he can’t win.

So, Madison trudges onward, attempting to stay in the game. He seems committed to the task not out of any personal reason as much as he’s fighting boredom and burnout. Passive anger at his superiors keeps him in the chase since proving the is alligator *really* is gigantic would show everyone up.

He doesn’t have to prove anything once the monstrous alligator leaves the sewer system once its (synthetic hormone-laced) food supply ends. The alligator breaks through the sidewalk in front of dozens of witnesses, turning an urban legend into a right/here, right/now disaster. So, everyone should turn to the one person who knew from the start for a solution, right? 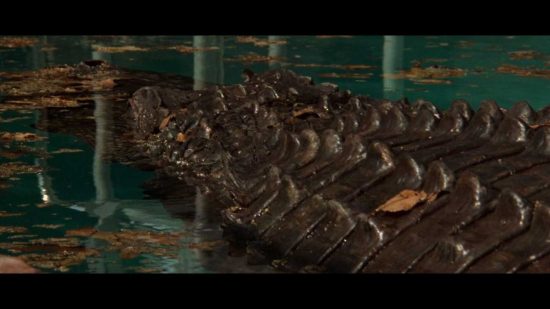 “New ballgame, Dave.” That’s what his supervisor tells him when Henry Silva‘s big game hunter character arrives on the scene to take away Madison’s thunder. The guy doesn’t get a break.

Madison possesses a detective’s deductive reasoning and knows alligators don’t grow that big by chance, especially when eating nothing but sewer rats. Something made that alligator grow to monstrous size, and the “something” is likely a bunch of shadowy “someones.” Madison’s frustrations grow to monstrous size because he’s after more than the alligator. As he says to his paramour, herpetologist Marisa Kendall, “Don’t understand me so quick.”

No one cares about the truth when it comes to the circumstances surrounding his St. Louis partner’s death. However, the truth becomes a big deal to the mayor when a top donor’s company’s illegal activities created giant reptile fever. There’s nothing to gain by showing empathy towards Madison but everything to lose by supporting his quest. 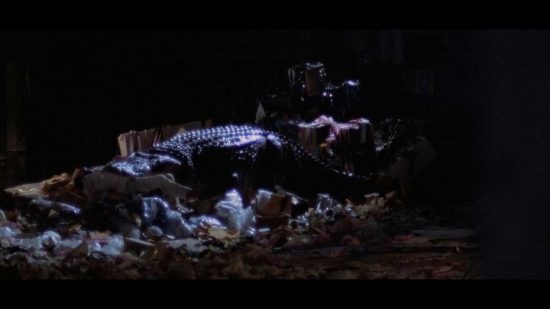 Salvation finally comes from the paradoxically likely and unlikeliest source: the alligator unexpectedly ends up at a Slade-sponsored wedding and expectedly eats the CEO, a corrupt researcher, and the mayor. Their exit from Madison’s life doesn’t deliver redemption, though. Things return to where they originally headed – David Madison gains redemption by blowing up the alligator.

Newfound respect for taking down the rampaging beast doesn’t save his soul. David Madison becomes a media star as newspaper and television reports detail his successful journey. The world loves a winner, and things will likely change at the precinct for the better.

Maybe now he can sing along with Jimmy C. Newman:

When I bring my hides to town all the people gather round,
They just want to shake the hand of the top alligator man.

==
Anthony M. Caro is the author of Universal Monsters and Neurotics: Children of the Night and Their Hang-Ups, available on Amazon Kindle. 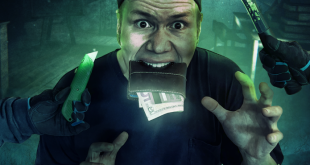